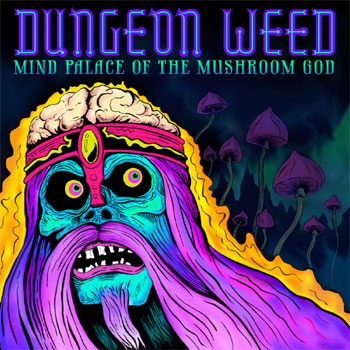 With their debut album Mind Palace of the Mushroom God, Oakland sludge rockers Dungeon Weed have carved out a niche of their own. Many stoner rock outfits lean toward a perspective that travels well-trodden territory like dungeons, dragons and other doomy topics. And while Dungeon Weed trades in some of the same subject matter, they do so with tongues firmly planted in their collective cheeks.

Mind Palace of the Mushroom God opens with the brown-note thudding of “Orcus Immortalis.” Apparently that’s Latin for … something: an orc, maybe? It doesn’t really matter, though. The lead vocals of Dmitri Mavra may remind older listeners of Black Oak Arkansas’ Jim Dandy, but because Dungeon Weed brings in Thia Moonbrook to double on the chorus vocals (an octave higher), there’s a much more nuanced vibe, one that at times feels like Black Mountain.

But the instrumental work – Mavra on mostly everything (guitars, bass, synthesizers) plus drummer Chris McGrew – is uber-heavy and irresistibly hypnotic. The track’s long fade-out sounds like the slow-motion soundtrack to a cinematic explosion. There’s atmosphere to spare on these tracks, and the production strikes a sinister space-rock character reminiscent of Hawkwind. Or Hawkwind played at 16 r.p.m.

“Beholder Gonna Fuck You Up” is the sound of a band who decided that what Black Sabbath really needed to do was to play slower. It’s more than two minutes before vocals even enter the arrangement, but because there’s enough going on musically, the lengthy instrumental break is apropriate. Squalls of distorted guitar adorn the song toward its end, and – uncharacteristically for the genre – they’re quite melodic. Oddly enough, a bit of synthesizer near the track’s end sounds like a jaw harp.

Credit Dungeon Weed for truth in labeling: “Lumbering Hell” is an apt title for the brontosaur of a tune, replete with howling wind sound effects, crushing guitar-bass unison riffing, and a relentless bottom end. Here, Dungeon Weed engages in a bit of black metal-style Cookie Monster vocalizing, but in the context of the track, it fits. The tune is so slow that it feels as if it might fall to pieces any second. But it never does, thudding forward, unyielding, for more than seven minutes. By adding more guitar overdubs, the band manages to increase the song’s intensity as it goes along.

Throughout the album, Dungeon Weed demonstrates a knack or exhuming new (or at least long-forgotten) riffs; even though the tunes are built upon repetitive melodic figures, Mind Palace of the Mushroom God never feels like an exercise in riff recycling. The record seems to trudge farther into the sonic depths as it goes along; just when you think the record can’t get any heavier, “Black Pudding” proves you wrong.

“Sorceror with the Skull Face” features funereal bells that explicitly evoke Ozzy and his pals. The relentless lockstep approach of Mavra’s guitar and bass is solidly supported by McGrew’s drumming; he sounds like he and his kit are submerged in a vat of molasses. The thunderous presentation wraps up with “Mind Palace,” and while the track doesn’t break any new ground, it delivers more of what brought Dungeon Weed this far. Mavra certainly likes his wah-wah pedal, and chances are that listeners who’ve followed along on the band’s fun (if not-exactly-jolly) musical journey will feel the same way.