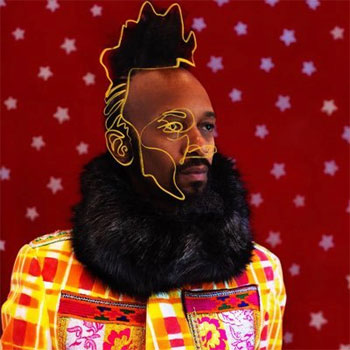 Police violence and racial disparity have been in the news a whole lot more in recent times than they had been in a long time. Do you think things are actually getting worse or are people just starting to get fed up and it’s starting to get reported on more?

Well, I just think it’s an open wound and it’s just been there; we’ve never dealt with it in America. We’ve just thrown stuff at it, and black people aren’t honest and white people aren’t honest and people aren’t very honest. We living in a time now where no one can be fucking honest. So I think all that hurts the relationship. You can’t have your relationship with anybody even your friends, if it’s always dishonest. So like I said before, we’ve been sick for a very long time, and now it just reveals itself.

Following on from that, I’ve heard it suggested – and I personally very much want this to be true – we had an eight year period where we were at least making some modest steps in the right direction and that the last 3 ½-4 years has been kind of the death throes of the last gasp of the people fighting against that. Do you think there’s anything to that, or am I being too pollyanna?

I don’t believe, it to be honest. I don’t believe it. I didn’t believe it, I don’t think in eight years we did anything. We didn’t do anything; what we did was have a show. And we’re like, “Hey, here’s our show; check out our show.” I don’t think there’s been government for a while. The world government is now corporation and billionaires. They are all new government so I don’t think they’re like this, “Hey man, do you want a black president? Wouldn’t that be cool?” “Yeah!” “You guys want a bigoted asshole?” “Yeah!” I don’t think that anything has really changed. To say that we had a black president … I knew it was meaningless then and I knew I was a minority and people yelling at me but it doesn’t mean anything. Black man, none of that means anything.

And the solution is: We got to be honest, man. We gotta stop screaming at each other and we’ve got to communicate. And on a visceral level. And I think if we can do that, we at least have a chance. Hell, I’ve been married 13 years, which kind of makes me an expert on relationships and how to get along with people who might think differently than you. You can’t just put on the show, and that eight years was a show. People are going to get mad at me, and I get it. And people yell at me and I’m used to it. But I just like the real shit, and that’s how I approach my albums.

That’s why I wrote a song called “Searching for Captain Save a Hoe.” I wanted to talk about the real shit. I’ve got one of the most real MC’s ever, you know, E-40. I want to talk about how we treat women when we’re in this cycle of, “Well, I can go around the world and fuck a bunch of women, and people will cheer me as a hero.” But if a female member of the band wants to take on that action, we view her as a whore. And so I want to talk about that.

That is a viable solution to a problem. It’s not a slogan; it’s not a show. I can’t do that shit. And it makes me a hard pill to swallow. Makes my music not as easy to digest. Makes my following on social media a little bit smaller, because I’m not playing games. And I’m not going to do the dance. I feel like I’m a contributor; I’m a great asset because I’m true to my feelings.

With all that as a backdrop, do you remain optimistic? Are you hopeful?

I’m Mr. Optimistic! Listen, I went on the street at 45 years old and thought, “Why don’t I start playing the guitar?” And I started this thing called Fantastic Negrito. C’mon, Bill. I’m optimistic.