Fantastic Negrito: ‘These are My Friends’

When Xavier Dphrepaulezz reinvented himself as Fantastic Negrito, his self-described “black roots music for everyone” struck a chord with the listening public. While he had released an album in the ‘90s as Xavier, the life-changing aftermath of a serious auto accident in 1999 led to his reboot as Fantastic Negrito. And the Oakland-based musician’s 21st century work has proven to be far deeper, more thoughtful and incisive. Both 2016’s The Last Days of Oakland and Please Don’t Be Dead from 2018 earned Grammy Awards.

Those albums resonate with an audience receptive to music that’s about something. Fantastic Negrito’s debut album explores life in his adopted home city, combining field-holler blues with a modern, urban sensibility: it’s blues that almost never sounds like blues. And while the first pressings of Please Don’t Be Dead may have featured a grainy cover photo of Dphrepaulezz in his hospital bed, recovering from the car crash, the title refers instead to the American dream. Fantastic Negrito makes catchy music, but it’s music of substance. And that substance is on brilliant display with his third album, Have You Lost Your Mind Yet? released in August. 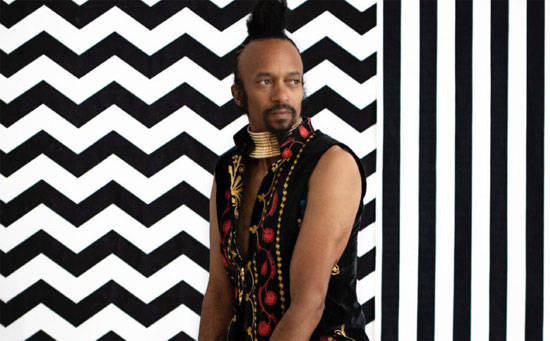 “I’m not here to make you feel comfortable,” asserts Fantastic Negrito. His hard-won, urban perspective is about more than merely drawing vignettes; there’s a foundation of searching for workable, practical answers to life’s challenges. The theme of Have You Lost Your Mind Yet? is mental illness, he says. “I’m not talking about the guy who’s talking to himself on the street,” he explains. “That’s the obvious mental health crisis. This has to do more with you, me: how are we coping with this proliferation of the internet and this access to media all the time?”

Fantastic Negrito’s themes tend toward the universal, but on his third album, he drills down to explore things at an even more street-level, personal vantage point. “I made the album micro rather than macro,” he says. “To be about my neighbor, my friend.” There’s a relentless onslaught of information coming our way; he says that challenges us. “How do we process this media machine that tells us what to think? It tells us whose lives matter, what slogans to say, who to sling these slogans at.” He believes that dogmatic mantra “on the left and the right entrenches us so much that it hurts.”

The current pandemic has lifted the lid, ripped away the mask to show just how sick we are, he believes. “As a society, we knew we had these problems and these pitfalls, but I think that this virus reveals just how broken and dysfunctional this great country – a great giant, a great force – really is.”

And Fantastic Negrito has a prescription to treat this collective illness: therapy. “And I did it the way I know about therapy,” he says. “Which is beats, hand claps, organ, guitar, vocals.” That idea has been a through-line connecting all of Fantastic Negrito’s work. As early as 2016 he would welcome audiences by announcing, “This isn’t a concert; this is group therapy.”

For his third full-length release, Fantastic Negrito allows his core group of musicians – guitarist Masa Kohama, keyboardist Lionel Holoman Jr. and bassist Cornelius Mims – to stretch out like never before. Several tracks – including the deeply funky “Your Sex is Overrated” and the groove of “Chocolate Samurai” – feature multiple instrumental solos. “I let them off the leash,” Negrito says with a laugh. “I wanted to show a little more of the musicians, and I wanted to open the game up.” Select guest artists – renowned Oakland rapper E-40 on “Searching for Captain Save a Hoe,” fellow Tiny Desk Contest winner Tank (of Tank and the Bangas) on “I’m So Happy I Cry” – add even more texture to a consistently engaging set of songs.

Have You Lost Your Mind Yet? also features more of Negrito’s instrumental work than previous releases. In his Oakland studio, Negrito begins each project alone, building the tracks himself. Only later does he bring in the other musicians to replace some of his parts. The injuries sustained in the wreck years ago left him with limited use of his hands. Yet on the new record, he kept a lot of his guitar work; it captured the essence of what the songs were about. “On ‘Chocolate Samurai,’ there was something about the way I was turning the guitar riff around,” he says, quoting Kohama’s reaction when he heard it: “It’s so bad, it’s good; I can’t do it.”

Fantastic Negrito recalls the inspiration for one of the album’s strongest cuts. The idea for “King Frustration” came when he saw his “crackhead, drug addict cousin walking down the street, the same street she’s been walking down for probably 40 years.” He decided then and there: “I’m going to talk about her. And that bass line, that’s gotta be about her.” The song’s bass line represents his cousin’s gait on that street.

The man born Xavier Dphrepaulezz believes that his latest album is his most personal to date. He succinctly describes Have You Lost Your Mind Yet? as “more funky, more upbeat, more moving. This album is like a 50 pound fish on a line. And I’m just, ‘Holy shit, when am I going to land this thing?’”

The micro-focus of Fantastic Negrito’s latest album still conveys his larger, more universal concerns. “I think that everything starts at the top,” he says. “And the signal at the top of this country is, ‘Hey, it’s okay to be bigoted, it’s okay to make fun of disabled people, it’s okay to be racist, it’s okay to speak disparagingly about women.’ This is our government … we have a guy who helps perpetuate that, so people feel like, ‘Yeah, I can say this. I can do this because it seems like it’s okay.’”

Yet Fantastic Negrito somehow remains positive, and the music reflects that. “C’mon, you know me: I’m optimistic, man. I believe we can, we must, we will. I believe it can all be done. No one’s more optimistic, but I’m also realistic. I think in order to remain optimistic you’ve got to be real about the work that you need to do.” And with his music and lyrics, Fantastic Negrito strives to do just that: it’s his mantra: “Go make an album again; go be real. Go make people uncomfortable.”

Stay tuned for more from my latest interview with Fantastic Negrito. — bk