Elvin Bishop and Charlie Musselwhite: Birds of a Feather Make Blues Together

The musical careers of Elvin Bishop and Charlie Musselwhite have followed similar paths. Both were raised in America’s heartland: Bishop in Iowa, Musselwhite in Tennessee. Both white musicians developed a deep and abiding love for the blues, eventually relocating to Chicago. After establishing themselves as formidable players – Bishop as a guitarist, Musselwhite as a blues harpist – both relocated to the Bay Area, immersing themselves in the region’s blues and rock scene. Both men created massive bodies of recorded work.

And they certainly knew of and respected each others’ music. “We’ve been friends for over 50 years,” Musselwhite says. Yet they never teamed up to make an album together until now. “Although we’ve planned it for 50-something years, our paths never really crossed that much,” Bishop says. “It just was hit-and-miss, here and there.” 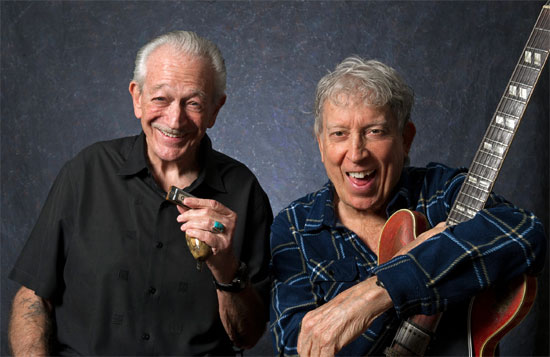 Their first collaboration took place when Musselwhite guested on a track included on the 2017 album Elvin Bishop’s Big Fun Trio. A highlight of that record is their co-written tune “100 Years of Blues.” The autobiographical song chronicles their parallel musical journeys in a way that makes the collaboration seem like the most natural thing in the world.

In fact it is. After that session, Bishop and Musselwhite started playing shows together. “We did a packaged show with several artists on it,” Musselwhite recalls. “And when we got together and did some tunes – just the two of us – it really clicked really well; it was just so natural and easy.” He says that it felt as if he and Bishop had played together all their lives, “because we know the same music.”

And now Bishop and Musselwhite have repurposed the title of their first collaboration for a new collection of music, 100 Years of Blues. Musselwhite laughs as he explains part of the motivation for the project. “It just made sense: if we were going to be doing these shows, we might as well have something to sell at the gig!”

Most of the songs on 100 Years of Blues – four written by Bishop, four from Musselwhite, a few well-chosen blues standards and a new recording of the title number – had been in their live set for a while. The easygoing, rural blues character of opening track “Birds of a Feather” sets the tone for the engaging collection. Joined by longtime Bishop sideman Bob Welsh on guitar plus producer Kid Andersen on upright bass, the no-drums 100 Years of Blues is a timeless set of tunes from a duo that has plenty to offer but nothing left to prove.

The sessions for the album – cut at Bishop’s Hog Heaven home studio in Lagunitas and finished at Andersen’s Greaseland Studios in San Jose – were quick, loose and informal. “Kid brought his equipment up and we recorded it just like we do it on the show,” Musselwhite says. “It was all live.”

Bishop gives credit to Andersen for his part in making the record. “The guy has got great taste,” he says. “Kid is very enthusiastic, a fun to be around guy in a recording situation, and he’s got a lot of good ideas. He sets a really positive atmosphere, and for this kind of music that’s 75% of the battle right there.”

But at its core, 100 Years of Blues is about the real chemistry between Bishop and Musselwhite. “It’s nice to play with somebody who’s so solid and real with his blues,” Bishop says. “Charlie is somebody who was lucky enough to be there during the time when I was, when all the classic Chicago blues guys were young and strong, and the blues ruled in Chicago. We have so much in common that it’s just a pleasure to sit down with him and play.”

The pair’s Chicago connection and shared history there is reinforced by the fact that 100 Years of Blues is on the Alligator label. Both Bishop and Musselwhite recorded for Bruce Iglauer’s Chicago-based label in the ‘80s and ‘90s, but both eventually moved on to other labels. Now they’re back, and Bishop says that it feels like family.

Bishop notes that after being away from Alligator for nearly a decade, he found a surprise upon his return to the label. “It was all the same people working all the same jobs! To me, that speaks well to the person doing the organizing. Bruce is a good guy and treats his troops well.” 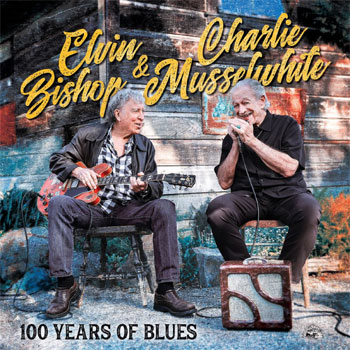 The immediacy of the songs on 100 Years of Blues comes in large part because both Bishop and Musselwhite have spent most of their lives immersed in the blues; it’s second nature. And Bishop says that while he sometimes spends a lot of time refining a song to get it the way he wants it, getting it right is often about not trying too hard. He relates a quote he attributes to country legend Hank Williams: “If it takes me over 20 minutes to write a tune, I just wad it up and throw it in the wastebasket.”

Listening to the new album, it’s clear just how much the musicians enjoyed making it. “When music’s played from the heart, you can play together with no problem,” Musselwhite says. And the relaxed, humorous character of the music shines through the performances. Humor has been central to Bishop’s music ever since 1968 when he left the Paul Butterfield Blues Band for a solo career. Even in the midst of a pandemic, and with smoke wildfires darkening the skies, Bishop remains upbeat. “There are so many situations you are confronted with where you can laugh or cry,” he says. “I really prefer to laugh.”