Today, October 21, is the birthday of blues guitarist Elvin Bishop. He came on the scene with Chicago-based Paul Butterfield Blues Band in the ‘60s. The eventual Rock and Roll Hall of Famer (2015) and Blues Hall of Famer (2016) went on to a prolific and creatively fertile solo career, though his fame outside the blues idiom came with the uncharacteristic single “Fooled Around and Fell in Love,” from his 1975 LP Struttin’ My Stuff. That song, sung by Mickey Thomas (later of Jefferson Starship) sounded nothing like most of Bishop’s work. More representative was that album’s title track, a lighthearted tune that combines blues, pop and funk.

I recently spoke with Bishop about 100 Years of Blues, his latest album, for a story that ran in SF Weekly. But our interview also got into his early days. Here are some highlights from our conversation, questions and answers that didn’t make it into that story.

I understand that Alligator Records was going to hold back the release of 100 Years of Blues until the live shows could resume. But with things on indefinite hold, it makes sense to release it. Do you think that once the pandemic gets behind us – and it has to, eventually – that you and Charlie will team up for live dates?

Elvin Bishop: Yeah, and we’re looking forward to it. We almost did one this month, but just when we got to thinking about it … it just ain’t worth it, you know? But we’d love to do that. We stay in good touch and we’ve done a couple of the live streams. Y’know, everyone wants to do the Zoom things these days.

I did a video about the lockdown. [Like the album] it was also done at Greaseland. Done by the Kid [Andersen]. He’s a real creative guy. Not only musically, but visually too.

What does Charlie Musselwhite bring to the music on the new album that it wouldn’t already have?

It’s just … he’s him. And he’s been refining himself, musically, for year and years and years. I’ve peeked in at different times and noticed. I happened to be talking to him a couple of years ago and I told him, “Something that I admire about you is that most guys our age have lost the motivation to improve. But you don’t seem to have. It seems like you are constantly striving to get new things together.” He really is. It’s just so real and so solid. You play with him and you have confidence. You listen to him and you believe what he is saying and you have confidence. It’s not like [playing with] a guy who learned a bunch of licks off a record.

Is that your original “Red Dog” Gibson ES-345 that you are holding on the cover of the new 100 Years of Blues album?

Yeah [chuckles] …I guess you could say that. For a while, like in the ‘70s, ‘80s, and ‘90s, my [experience] was that every five years either the thieves or the airlines would get one of your guitars. But during that time it was cheap enough that you could just go down to the pawn shop and get another one. But this 1959 Gibson … I had a friend of mine look it up on the internet, and it’s worth so much it scared me to death. Especially considering the fact that the airlines would give you $3-400 if they lose or damage it. So I pretty much leave that at home except at driving gigs you know? I got Gibson to make me a replica.

Right. Enough bad shit is going to happen without you doing that. 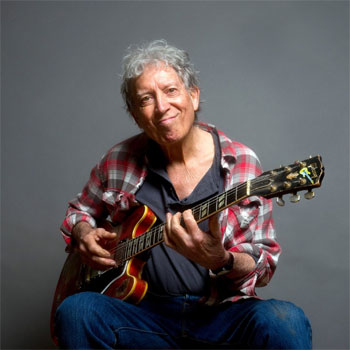 I am fascinated by the fact that your earliest exposure to blues was on the radio. Is it right that you didn’t see a live blues performance until you got to Chicago?

Do you remember the first blues show you saw when you got there?

Yep. Here is the personnel of the band. Muddy Waters on vocals. James Cotton on harmonica, Otis Spann on piano, Willie “Big Eyes” Smith on drums, Pat Hare on guitar, and a bass player; I don’t remember his name. But what a stroke of luck getting all those! And being the only white guy in there, I said, “Man, these blues bands are pretty good!”

I got a scholarship; I could go basically anywhere I wanted to. My family didn’t have any money, so I went to the University of Chicago because I knew that’s where the blues was. I heard that the social situation was a little better, and, you know, this was 1960: hardcore segregation and all that before civil rights.

And, man, to be honest, the education was always a cover story to get where blues was. Because I didn’t want to hurt my family’s feelings. I come from a long line of farmers and I don’t think anybody in the family had ever been to college. A college education was a big thing for people who had been through the depression. So, I played along with that as long as I could do it. But eventually the music just took over.