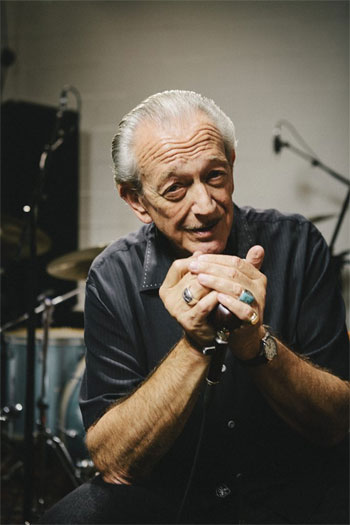 Renowned blues harp (or harmonica, if you like) player Charlie Musselwhite was born in Mississippi, raised in Memphis, and headed to Chicago to follow the blues. His landmark 1966 LP Stand Back! Here Comes Charley [sic] Musselwhite’s Southside Band is an exemplar of the powerful Chicago blues style. He has won 14 Blues Music Awards, received multiple Grammy nominations, and – so the story goes – was the inspiration for Dan Aykroyd’s Elwood Blues character on Saturday Night Live and in The Blues Brothers. He was inducted into the Blues Hall of Fame in 2010. Most recently, he collaborated with longtime friend and fellow bluesman Elvin Bishop on an album for Alligator Records, 100 Years of Blues.

My recent interview with Musselwhite provided a number of quotes for a story that ran in SF Weekly; below are some additional highlights that didn’t fit into that feature.

Going way back, do you remember the first blues show that you attended as an audience member?

Hmm … I remember as a little kid, back in those days downtown was where you went for a show. You didn’t have malls. And I used to watch these blues street singers in Memphis downtown. I don’t think that was a blues “show,” but that was an early memory of mine. Seeing those, I was fascinated by ’em. And before I’d get on the bus to go back home, I’d wander around downtown on Beale Street, because I just wanted to hear or see one of those guys. I was just real tuned into them. I was just a little kid, and I didn’t know what I was going to end up doing. If I had’ve known that, I would have paid a lot more attention!

For you, what are the Hallmarks of what we call Chicago blues?

I had lived on the North Side when I first got to Chicago. I didn’t even know there was a North or a South Side; I didn’t know anything about Chicago. So I ended up accidentally on the North Side, and the white people in northern Chicago couldn’t understand me. I didn’t know what they were saying … I mean, I could kind of get it. But when I moved to the South Side, everyone knew what I was saying perfectly.

You’ve played with a lot of people over the years. Is there one renowned blues artist you wish you’d had gotten to play with but didn’t?

When I first got to Chicago, I remember seeing signs for Elmore James singing in town and playing. But there were just so many people to see, so before I got around to it he was gone. And I found out later he was staying not far from where I was; I might have passed him on the street and didn’t know it.

You’ve earned a really impressive pile of awards and recognition in blues, but what I also find interesting about your work is how often you work with artists who are outside of blues. What drives you to work with non blues artists?

I think it’s really great when you can take a non blues situation and add the blues to it and make it better. Like with Cuban music: it just seemed so natural and I thought the music had a real bluesy feel to it anyhow. I’ve played with street musicians all around the world, and with the local folk it just seems like it’s from the heart. It’s the language of the heart. Even if you can’t speak to each other, you can play together. I think that’s really interesting how we’re connected in that way.

Stay tuned for my interview with Elvin Bishop. — bk