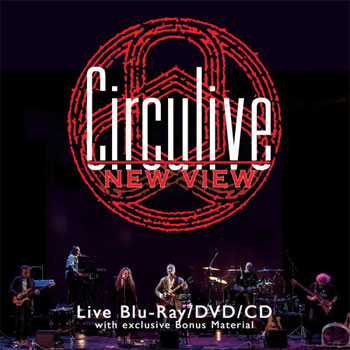 For whatever reason, my own tastes with regard to progressive rock lean heavily toward music coming out of the UK. Given the choice between, say, Genesis and Kansas, I’ll always opt for the British group. There are occasional exceptions: the work of Spock’s Beard – especially the Nick D’Virgilio era – is some amazing stuff. And these days, King Crimson is nearly as American as it is British. But my preference remains.

Yet I am open-minded. So I’m intrigued when I receive a new audiovisual set (CD+DVD+Blu-Ray) called Cicruline: New View. It’s a document of a live set from New York progressive outfit Circuline. The band crafts tuneful music that is rooted both in melodic, accessible “classic” rock styles and a more ambitious, keyboard-centric progressive mindset.

A track like “One Wish” gets underway with a mid-tempo melody, sparkling piano from founding member Andrew Colyer, and Natalie Brown’s pretty, expressive vocals. But just when you think you’ve sorted out what the tune is about, it takes a hard left turn into heavy riffage and progressive stylings. It’ never rivals Porcupine Tree’s “Arriving Somewhere But Not Here,” but “One Wish” has a similarly diverse approach, and it’s a successful execution of that varied musical outlook.

Still, some of the musical elements feel odd and ill-fitting. The bass through a wah-wah (or envelope follower) of “Nautilus” is a bit goofy, and the song’s massed shout of “Hey!” feels more like a parody of arena rock. Yet the tune itself is interesting. And there’s a tune here that’s actually titled “Piano Challenge.” It’s the kind of thing that leaves prog open to charges of being pretentious, even though sections of it sound more like Styx than Keith Emerson.

Prog fans whose tastes lean toward the heaving, guitar-based stuff may find that there’s more piano here than they might like, but the musical pyrotechnics of numbers like “Hollow” are nothing short of breathtaking.

One track includes something called “Drum Feature,” but it’s one of the least remarkable “drum solos” I’ve ever heard. There’s nothing wrong with it, exactly. But it’s far from memorable. Yet it’s offset by the semi-epic “Summit,” eleven minutes of songs, solos and musical contrasts. “Summit” never reaches the heights (oof) of the most timeless progressive music, but it’s intriguing nonetheless.

The songs don’t really linger in the memory after they pass: for all their excitement and energy, Circuline doesn’t display a facility for crafting strong, durable hooks. Circulive: New View is good for what it is, but a spin of the CD is most likely to what the listener’s appetite for something more substantial and satisfying.

Still, taken as a whole, Circulive underscores the reality that there’s a healthy and thriving progressive (or progressively-inclined) scene in the United States, and Circuline is at its center. As progressive rock, 2020 edition goes, Circulive: New View is far from an embarrassment. The textures of mainstream rock are there, and the instrumental virtuosity and compositional ambition are worthy of praise.