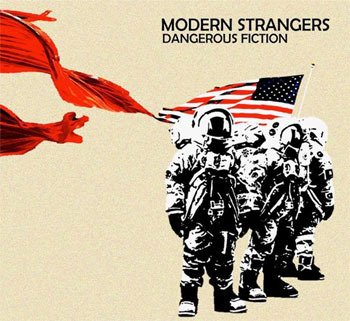 Infectious tunes like the speedy pop of Modern Strangers’ “Where’s Your Man” – the speedy pop gem that’s the leadoff single from Modern Strangers’ debut album, Dangerous Fiction – combine rock grittiness and the sleek, streamlined vibe of classic pop. Listeners yearning for weepy, introspective balladry are advised to look elsewhere; this band is all about fun. Modern Strangers unveiled the album with a live stream performance on September 26.

Drummer Courtney Cahill says that Modern Strangers came together in 2012 to address what he and co-founder David Rogers saw as an unaddressed need in the Asheville music scene. “We wanted to fill a gap by creating some ‘pop’ rock and roll,” he says.

“If I hadn’t met Courtney, I would still be playing these songs in my basement,” says Rogers, guitarist and the band’s primary songwriter. Cahill confirms that Rogers isn’t engaging in hyperbole: “I don’t know if he never wanted to ‘play out,’ or if he just didn’t have the gusto,” he says. “But my goal was to use my organizational skills to bring his songs to the people; I thought they were too good not to be heard.”

Lead guitarist Troy Crossley and bassist Alex Deutsch joined the group in 2016. Even though they came from different musical backgrounds (punk and the jam band scene, respectively), their addition gave Modern Strangers all of the elements needed to deliver a signature sound. “What really made me want to join the band in the first place was how catchy David’s vocal lines are,” Crossley says. “They just begged for harmonies, and I was more than thrilled to [add] that.”

The band self-describes its sound as “jangle pop,” though some would call it “power pop” – tuneful, uptempo rock with Cheap Trick-like energy. “From the start, we were trying to get that British Invasion jangle sound,” Cahill says.

To date, Modern Strangers hasn’t mounted a tour; because all four musicians have day jobs and families, touring isn’t practical. Instead, the band has focused on building an enthusiastic local fan base. One tangible result was landing the number two spot on last year’s “Best of WNC” poll in the rock band category. “That definitely helped in bookings,” Cahill notes.

The group also scored a high-profile gig opening for Gin Blossoms when the latter headlined at The Orange Peel in December 2017. “That was huge for us on a couple of levels,” Cahill says. “One, it got our name out there; it kind of legitimized us.” Secondly, video footage of the band’s well-received set served as an effective promotional tool. “Just one little shareable clip can go a long way,” he says.

Deutsch chimes in to add another benefit of that performance. “The fact that we made it through that was a good boost for our confidence,” he says with a laugh. “I had never played in front of 850 people before. That was one of the best nights of my life.”

With all that momentum spurring the band forward, Modern Strangers got busy making its debut album. But even though Rogers is credited as the group’s songwriter, he emphasizes that the music on Dangerous Fiction is the result of a collaborative creative process. “I’m proud of the album on a personal level,” he says. “But I’m even more proud of it on the level of what [we all] made it.” 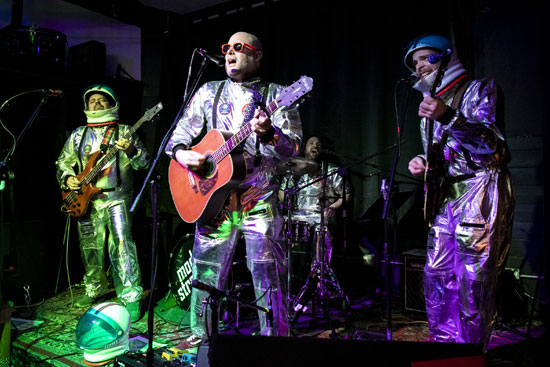 New songs are run through the band’s rigorous quality control program. “But most of them make it through,” Deutsch says with a laugh. “Because we’re able to work on them until we get them where we want them.” The goal is to create catchy songs that feel good. “And if one falls a little flat – if it’s not something that’s fun and that you could sing along to – we drop it.”

Crossley reiterates the point that fun is the goal. And because Modern Strangers has enough original material that meets its standards, each live set is crafted to match the room. “What works at Jack of the Wood at 9 o’clock is different than what works at the Odditorium at midnight,” he emphasizes. “And that’s different from what works at 5 Walnut at one in the morning.”

The current pandemic has severely limited the band’s opportunities to play in front of an audience. But the band knows what works at 7 p.m. at The Orange Peel. So even though the group’s debut album release event is a live streamed performance, the goal of that September show is to bring all the excitement and energy of a “real” show. Cahill says that’s what Modern Strangers is all about: “being able to go play downtown in a world-class music scene on a Saturday night. This is our fantasy band.”