This week marks the 50th anniversary of the release of Atom Heart Mother, the fifth album from Pink Floyd. In this edited excerpt from my book, Reinventing Pink Floyd: From Syd Barrett to The Dark Side of the Moon, I discuss the making of the album’s epic title track with Pink Floyd’s collaborator, Ron Geesin. – bk 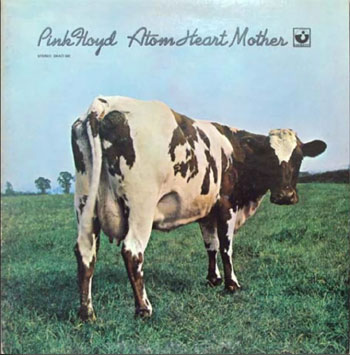 Feeling that they had hit a creative wall with a lengthy piece they had been playing live, Pink Floyd’s other band members were receptive to a suggestion from Roger Waters that they call upon Ron Geesin for help. The composer’s avant-garde credentials were next to none; perhaps he could give “The Amazing Pudding” – or whatever the band’s latest epic would eventually be called – what was needed to bring it into shape for release.

“When we did Atom Heart Mother, they were at their lowest point of creativity,” says Geesin. Acknowledging how busy the members of Pink Floyd had been with outside projects, he says, “they were pretty exhausted, and they didn’t really know where to go. It just happened that I was on the spot around that time.”

In some ways, Geesin was an odd choice. For one, Pink Floyd had never worked with an outside composer, nor used session musicians (save Norman Smith’s drumming on A Saucerful of Secrets‘ “Remember a Day”). And by 1970, the group had largely taken control of its studio work: on release of Atom Heart Mother in October, Smith would be listed as “executive producer.” More significantly, perhaps, was the fact that Ron Geesin wasn’t even a fan of the band’s work. “I wasn’t interested much in their music,” he says. “I’m still not. It doesn’t do anything for me.” Speaking about progressive rock – a term often applied to Pink Floyd’s music – Geesin sniffs, “it doesn’t matter how progressive it thinks it is; it’s not actually very progressive at all.” Even though Geesin had shared billing with Pink Floyd as far back as 1967, he contrasts his music with the sounds they made. “I would just do my thing, which is a sort of an absurdist eruption,” he says, describing it as “a nice contrast to what was going to come on next.”

Still, owing to his friendship with Roger Waters and the positive experience of collaborating on the soundtrack for The Body, Geesin agreed to help. In early April 1970, the band provided Geesin with work-tapes of the early version of “Atom Heart Mother” and then got on a plane to New York City, where they would begin a North American tour that would run through late May.

From Geesin’s perspective, the material he had been given was rather basic and lacking in melody. He characterizes Pink Floyd’s musical approach this way: “If it wasn’t a defined song, then they would be making what was equivalent of a background wash to which the public supplied its ethereal melody in its own [collective] head.” But for “Atom Heart Mother,” it was – among other things – Geesin’s job to create an actual melody. “With ‘Atom Heart Mother,’ I supplied the melody to their background, literally,” he says.

When it comes to popular music – be it rock, country or many other styles – the concept of repetition is a feature, not a bug. But for the avant-garde-minded Geesin, the repetitive nature of the Pink Floyd track he was working on was a bridge too far. Upon hearing the main theme reprising for what to him seemed like the umpteenth time, he recalls exclaiming, “Oh God, not again!” So he decided to change it. “The last two choruses – if you want to call the sequence a chorus, which is the same chord sequence as the first theme – I just changed it to a whole completely new melody,” Geesin says. “Which really works: you’ve got the repetition underneath but you’ve got the top doing [something] different.”

With “Atom Heart Mother,” Geesin sought to transform Pink Floyd’s piece – noted on early session documents as “Untitled Epic” – into something a bit more musically weighty and serious. One way in which he pursued that goal was to compose parts for a brass ensemble and choir. While choir-like vocals had cropped up toward the end of “A Saucerful of Secrets,” Syd Barrett had brought in a Salvation Army band for his final Pink Floyd session, and Rick Wright had performed a trombone solo on “Biding My Time,” Geesin’s plans would represent exploration of new territory for the band.

“When we got in the studio, they had no bloody clue what was going to happen with those brass players,” Geesin says. The members of Pink Floyd had not yet heard a note of Geesin’s score, he says, “because I couldn’t play those 10 brass parts on the piano to them.” But once the ensemble did record Geesin’s written parts on top of a basic track cut by Waters and Mason, everyone seemed satisfied. “They’d run the tape with my new stuff, and it seemed to sound right,” Geesin says.

The vocal choir that appears toward the middle of “Atom Heart Mother” splits its time between somewhat conventional – if wordless – vocalizing and some truly weird recitations (“Suck! Suck!” in the section subtitled “Funky Dung”) that are unlike anything in the Pink Floyd catalog before or since.

The part of “Atom Heart Mother” known as “Mind Your Throats Please” is closer in spirit to Pink Floyd’s own outré musical excursions such as “A Saucerful of Secrets,” but Geesin’s contributions are faded in and out of the mix as well on the final version. And in keeping with the band’s penchant for including found sounds into its works, toward the final moments of “Atom Heart Mother,” two snippets of studio chatter (“Here is a loud announcement!” and “Silence in the studio!”) are woven into the sonic mix.

Geesin would experience great frustration during the sessions for “Atom Heart Mother.” Owing to EMI’s prohibition on tape splicing, the basic track laid down earlier by Waters on bass and Mason on drums had to be performed as a single performance rather than a spliced-together collection of shorter tracks. In practice that meant that the tempo wavered throughout; that, in turn made it quite difficult for classically-trained brass and choral musicians to follow along when overdubbing their parts. “The tempo goes up and down,” Nick Mason told MOJO in 1994. “We just staggered through it.” Furthermore, once the orchestral parts were added, it was realized that the entire score was off from Pink Floyd’s basic track by one beat; there was no way to correct the error.

Despite misgivings – regarding how the piece was completed, what he sees as an unfair diminution of his credit for the work, and frustration with how it was performed – Ron Geesin remains quite proud of his work on the first side of Atom Heart Mother. He views it as a moderately successful combination of Pink Floyd’s style with something more adventurous. “If you take two seemingly disparate styles and put them together, sometimes they’ll make something greater than the original two,” he says. “And I think that’s what happened with Atom Heart Mother.”