Guide for the Turtles Fan: An Album-by-album Discussion with Mark Volman (Part 2 of 3) 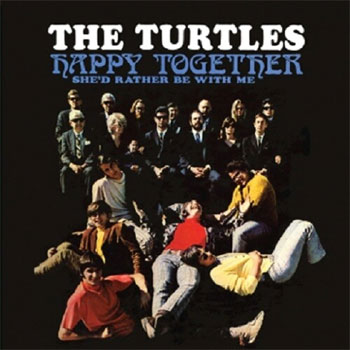 Happy Together (originally released April 1967)
Only four of the 11 songs on Happy Together would be written by group members, but once again, superb taste in choosing material yielded the band’s finest release to date. Years before he made a name for himself as a recording artist, Warren Zevon provided The Turtles with the lilting, heartfelt “Like the Seasons.” With that tune, The Turtles “were introducing one of the most important songwriters of that era,” Volman says. (Zevon had already penned a chiming 12-string rocker for the band, the “Taxman”-influenced “Outside Chance.” Released as a Turtles b-side in July 1966, it wouldn’t surface on LP until 1970.)

Songwriters John Williams and Lesley Bricusse were already on a winning streak writhing songs for Broadway shows when they penned “Guide for the Married Man,” a delightful theme song for the movie of the same name starring Walter Matthau. The ba-ba-ba vocalizing of “Guide” was perfectly suited to The Turtles’ quickly-developing sunshine pop style. It sounded like a hit single but completely failed to chart. “It’s one of the most overlooked soundtrack songs as well as just being a great-written song,” Volman says.

Happy Together isn’t wholly free of misfires, though. The Kaylan-Nichol tune “Rugs of Woods and Flowers” features an appealing baroque pop arrangement, but Kaylan’s mock-operatic vocals – a hint at the style he’d sometimes use when he and Volman joined Frank Zappa’s band – relegate the tune to novelty status.

The record includes three songs from the team of Garry Bonner and Alan Gordon: “Me About You,” the delightful love song (with cowbell) “She’d Rather Be With Me,” and the Turtles’ biggest hit, “Happy Together.” Yet as consistently strong as it is, Happy Together is best-known for its title track. A hit single in Canada, Ireland, New Zealand, South Africa and the UK, “Happy Together” claimed the #1 spot on U.S. charts, forcing The Beatles’ “Penny Lane” from the top position.

“That was a good lifesaver, there,” says Volman with a chuckle. “’Happy Together’ still lives and breathes quirkiness. But nobody knew it was going to be what it became: a 50-year adventure.”

The album as a whole represented a maturing of the band. “Bones was kind of out of the picture,” Volman says. “And [producer] Joe Wissert was kind of moving into the scene. Joe brought with him a quirkiness that really fit with us.” Happy Together “really shows off what we were capable of doing as singers and as arrangers,” Volman says. “We were beginning to be more and more involved in the production and the sound.” And it showed. The Turtles’ next record would represent the band’s crowning achievement. 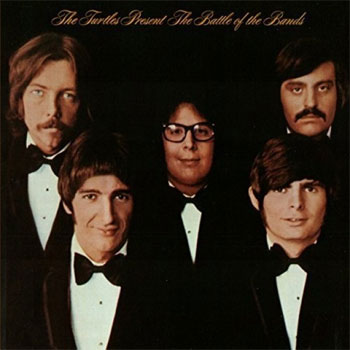 The Turtles Present the Battle of the Bands (originally released November 1968)
By 1968, the concept album had come into its own as a viable means of creative expression. The Who Sell Out found the British rockers applying their talents to the creation of a complete radio program with (faux) commercials. The Moody Blues combined rock, light classical and a day-in-the-life song suite into Days of Future Passed. Van Dyke Parks made Song Cycle, and Brian Wilson led The Beach Boys (and Wrecking Crew) on a journey through Pet Sounds. And on Sgt. Pepper’s Lonely Hearts Club Band, The Beatles assumed the guise of a fictitious band.

On their concept record, The Turtles would attempt to go not one better, but eleven better. For each of the songs on The Turtles Present the Battle of the Bands, the self-contained group (aided by producer and creative collaborator Chip Douglas) reinvented itself as a different band.

Battle is a bouquet of musical styles, from Bakersfield country (“Too Much Heartsick Feeling” as Quad City Ramblers) to Strawberry Alarm Clock-style pop-psychedelia (“The Last Thing I Remember” as the Atomic Enchilada) to ersatz Simon and Garfunkel (“Earth Anthem” by those global hit-makers All).

With three exceptions – a title track written by Douglas with band friend Harry Nilsson, “Earth Anthem” and a better-than-the-original cover of The Byrds’ “You Showed Me” – Battle featured all original material. And the unquestioned spotlight tune on the album was written in response to White Whale’s insistence on more sunshine pop hits like “Happy Together.”

With its intentionally offhand lyrics (“You’re my pride and joy, etcetera,” sang Kaylan and Volman, the sarcasm all but dripping from the mics), “Elenore” was conceived as a parody of a mindless pop song. Instead it became The Turtles’ fourth Top Ten hit single.

The idea of a concept album came before the songs. “We knew we wanted to do something as a whole, and we didn’t know what it really was going to fashion itself to be, but once we realized it, we already had it,” Volman says. He considers Battle and its follow-up, Turtle Soup, his favorite Turtles albums. “Those two records cover a part of our history that’s kind of overlooked,” he says.

Even though Battle of the Bands wasn’t a hit LP on the scale of Happy Together – it only reached the #128 spot on Billboard’s album chart – it has worn exceedingly well for its ambitious scope and on-target humor. And one of its deep tracks found a new life in the decades to come. “’Buzzsaw’ became important to the continuation of the ownership of our recordings,” Volman says. “Because we had a couple of hip hop artists take our songs and make us relevant again.” The mostly-instrumental track has been sampled by X-Clan, Insane Clown Posse and several other acts.

Many of the tracks on the second LP in the new Battle reissue were first released on the (now long out-of-print) 1987 Rhino LP Chalon Road. And a hidden bonus track featuring outtakes from a vocal session is a vivid reminder – should one be needed – of Howard and Mark’s peerless vocal prowess.