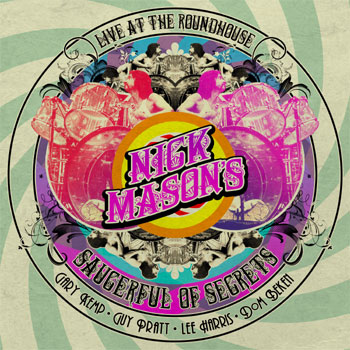 In the 21st century, it’s not a bit unusual for well-known and celebrated music artists to tour o nthe strength of material they recorded and released a half century ago. As fine as 2019’s Who might be as an album, few bought concert tickets with a goal of hearing material from it, Endless Wire or either of the group’s early ‘80s LPs. Prior to the March 2020 ceasing of live concert tours, The Rolling Stones and Fleetwood Mac were foremost among acts who continued to draw crowds despite the lack of any new music of note in, well, decades.

On a more positive note, Brian Wilson, The Zombies and a select few others have capitalized on their finest moments – 50 years past, mind you – to provide superb evenings of entertainment. And amid all of this, one of the unlikeliest figures to engage in such a thing has done what didn’t seem possible: Nick Mason has revived the catalog of pre-The Dark Side of the Moon Pink Floyd for concert audiences.

In addition to being the perfect drummer for Pink Floyd (in the same way that Ringo was the perfect Beatles drummer), Mason can lay claim to being the only musician on the planet who has played on every single album the band ever made. He was there at the start, there at the finish, and there throughout the ups and downs of the group’s career. His inimitable wit – something that shines through the (admittedly few) interviews the band ever did, makes an appearance onscreen in Pink Floyd Live in Pompeii and informs every page of his memoir Inside Out: A Personal History of Pink Floyd – makes him one of the most instantly likable figures of rock’s classic era. And he gets along with both Roger Waters and David Gilmour.

Pink Floyd compiled the sprawling boxed set The Early Years a few years back; that set dug deep into the band’s body of work that – viewed with the benefit of hindsight – inexorably led to the masterwork that is The Dark Side of the Moon. But in the process, for many fans, everything pre-Dark Side seemed to disappear. Save a few Syd Barrett era cuts like “See Emily Play,” the substantial body of work up to 1972-ish had been largely forgotten. By focusing on the leftovers, outtakes and live version scattered throughout that period, The Early Years made a convincing case for that material’s importance.

Heck, I even wrote a book about it. But – as an aide – it’s worth noting that my plans for the book (and in fact my contract with my publisher) predated the announcement of The Early Years set. A happy coincidence, that, as I have long been a very serious fan of that era of pink Floyd’s music.

So when Nick Mason and his pals set out and play that music live, it was a joy for those like myself who love early Pink Floyd. And the band he assembled was at once staffed with top-notch players and free of nostalgia. Guitarist Gary Kemp comes from – of all things – Spandau Ballet. In fact the whole idea for Nick Mason’s Saucerful of Secrets came from guitarist Lee Harris and bassist Guy Pratt. The latter had been the longtime bassist in the post Roger Waters lineup of Pink Floyd. Dom Beken played keyboards in The Orb, a band with a slight Floyd connection (Gilmour made an album with them some years ago).

While those players grew up hearing and appreciating early Pink Floyd, none had much experience actually playing it (even Pratt would have only played “Astonomy Domine” and a few others live). So they would bring a fresh perspective to the music.

What’s remarkable about Live at the Roundhouse isn’t so much that it sounds just like Pink Floyd – it often doesn’t – but that it almost always feels like that band. The arrangements are faithful but not slavish or too-reverent-by-half. There’s room for personal expression, and sometimes the sonic textures differ form the originals, but the whole vibe of early Pink Floyd is on brilliant display. There are clever little “Easter Eggs” inserted into some of the songs, snippets of other, even lesser-known tunes from Pink Floyd’s catalog – that will delight the Floyd anoraks (like myself), but at its core, Live at the Roundhouse is a flawlessly sequenced, perfectly executed sonic trip through the era of Pink Floyd’s development.

The band doesn’t take a chronological approach to the material; instead it leaps back and forth between gems from Piper at the Gates of Dawn, Meddle, Obscured by Clouds, More, Atom Heart Mother, A Saucerful of Secrets and Ummagumma. And the set even tosses in a few non-LP tracks. In some cases, the arrangements split the difference between the recorded versions and the way Pink Floyd played them live. Some tracks are (understandably) cut down in length: “Atom Heart Mother” is a prime example. But in the space of a conventional song, Mason’s SOS manages to deliver nearly everything that’s special about that unfairly maligned epic-length track.

For more casual fans, there’s still plenty to like. Both “Astronomy Domine” and “One of These Days” had found their way into Gilmour-era Pink Floyd live sets. But hardcore fans will delight in the inclusion of several songs that Pink Floyd rarely (and in some cases never) perfomred in front of a concert audience. Among those are the gentle, dreamy “Fearless” from Meddle, the Floyd-at-its-most-metallic “The Nile Song,” the Syd Barrett-era “Bike: and the band’s first post-Barrett single, “Point Me at the Sky.” They even turn in an inspired reading of “Vegetable Man,” a Pink Floyd song so obscure (yet venerated by diehard fans) that it only saw official release in 2016.

There are some who underestimate Mason’s drumming ability. He didn’t help matters much in that regard when he ceded much of the drum work on A Momentary Lapse of Reason to session drummers. Interestingly, Pink Floyd’s recent The Later Years boxed set attempts to repair that by erasing those session drummers’ parts, replacing them with new tracks featuring Mason behind the kit. That – -along with stripping away of some of the ‘80s sonic trappings of that album – makes for a drastically improved listening experience.

And Mason – who was already in his mid 70s when the performances that make up Live at the Roundhouse were recorded (May 2019) sounds every bit as good as he did 50 years ago.

Anyone who appreciates The Dark Side of the Moon will be enriched by hearing live versions of “Childhood’s End,” “Obscured by Clouds” and “Green is the Colour.” Most bands would kill to have a body of work as adventurous and varied as Pink Floyd circa 1967-72. And with Live at the Roundhouse, Nick Mason’s Saucerful of Secrets are reminding 21stcentury listeners just how special that music is.