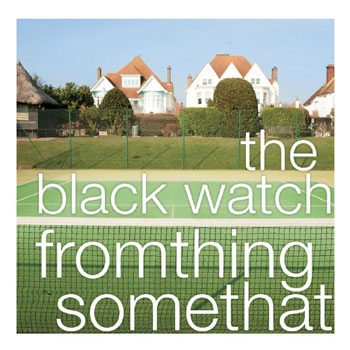 It’s difficult to keep up with the steady stream of output from The Black Watch. Just last year the group led by John Andrew Fredrick released a pair of albums – the 31 Years of Obscurity compilation and the all new Magic Johnson. Those were followed in short order by Brilliant Failures, reviewed in April. It’s only September now, and here we are with another set, the ten-song Fromthing Somethat.

Yes, It’s difficult, but it’s also well worth the effort. Fromthing Somethat is merely the latest in a succession of superb albums. The shoegaze-meets janglepop aesthetic that defines The Black Watch sound is in full flower here; tracks like “Saint Fair Isle Weather” have the vibe of less-mopey Cure or an antipodean version of The Church. Fredrick knows his way around a catchy melody, and exhibits a seemingly effortless ability to craft tune after memorable tune. And while there’s a kind of signature sound for the group, The Black Watch’s music never feels samey. One element that sets this latest release slightly apart from its predecessors is the haunting vocal work of Julie Schulte; it adds another intriguing ingredient to the already heady mix. Listen to “The Lonesome Death of Many Hansen” – a typically literary song title, by the way – for proof.

By my count, Fromthing Somethat is the band’s 18th or 19th album of new material; that doesn’t include compilations or the several EPs released since the band’s start in the late 1980s. (And it doesn’t include another EP, The Nothing That Is, scheduled for release in two months.) I remain astounded that the band hasn’t scored even a modest commercial hit; all of the elements are there, and none of the negatives. I highly recommend most any record in the band’s recent catalog (I am not yet familiar with the earlier material) and this latest is as good as an an entry point into the world of The Black Watch.

Nota Bene: You can stream a dozen releases from The Black Watch at the band’s bandcamp page. But support them by buying some while you’re there.