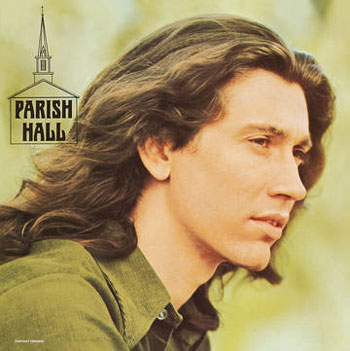 One of the longest lists that exists is the one noting recordings that were overlooked because there was simply too much good music already happening. It’s a delight – especially for a listener who enjoys musical styles whose time has (officially, any way) come and gone – to discover a long lost, previously unheard gem from, say, 1970.

Parish Hall was a Bay Area power trio at a time when the power trio sound was just past its peak. By 1970 Cream had come and gone, and Led Zeppelin (an instrumental trio with a singer) was already starting to diversify into acoustic sounds. So it could be argued that by the time the band’s sole release, a self-titled LP on Fantasy Records, appeared, it was too late for them to have much chance at widespread success. The record went out of print and slipped into obscurity (not that it had ever ventured far beyond it to begin with). But undeservedly so.

Fronted by guitarist, singer and songwriter Gary Wagner – I’m guessing that’s him on the album’s cover – Parish Hall rocked, and hard. “My Eyes Are Getting Heavy” features evocative lyrics and intense, melodic riffage. More than one reviewer has likened the band’s musical character to The Jimi Henderix Experience; while Parish Hall is quite a bit less experimental – you’ll find nothing on the par of Axis: Bold As Love’s “EXP” – the comparison is not without merit.

Wagner is master of tone; he varies the sonic qualities of his guitar several times within a song; that’s an admirable quality for a power trio. And overdubs mean that you’ll often experience several interesting guitar parts simultaneously. It’s a well-produced record, thanks to Ray Shanklin, presumably the same Shanklin who released a string of rhythm and blues singles.

Even when Parish Hall isn’t groundbreaking – as on fairly rote bluesers like “Dynaflow” – it’s still compelling. “Ain’t Feeling Too Bad” is a rousing number that builds on the Bobby “Blue” Bland style by casting it in a more rock-leaning idiom. Wagner’s organ work is competent, but a proper organ solo (from a guest like, say, Lee Michaels) could have taken the tune into the stratosphere. And even the more contemplative numbers like “Silver Ghost” have appeal, with a sound halfway between Grand Funk Railroad and The Allman Brothers.

A listen to “Skid Row Runner” suggests that the members of Parish Hall were well acquainted for Led Zeppelin’s first album. “Lucanna” enters the speed guitar sweepstakes, Alvin Lee Division, and fares well in the competition. “We’re Gonna Burn Together” does well with a familiar chord progression, though its slightly thin production values feel out of step with the rest of the record.

“Somebody Got the Blues” is roaring blues that should have made fellow Bay Area blues artists like Steve Miller take notice (there’s no evidence that it did so). The plodding, sinister “How Can You Win” is a bit too reminiscent of “If 6 Was 9,” but let’s not hold that against it; Parish Hall displayed enough originality elsewhere to merit giving them a pass on this one. The piano-centric “Take Me With You When You Go” offers a quieter feel to close the album, but it inserts additional variety into the album, suggesting that – had they continued – Parish Hall might have made a follow-up record worthy of hearing. But their self-titled effort would be the only recorded document of the group.

Original copies of Parish Hall – should you find them – change hands on discogs.com for the median price of $140. Due to the limited, enforced-scarcity nature of Record Store Day releases, the new vinyl reissue from Craft Recordings will likely soon fetch high prices as well. Out September 26; get it while you can, if you can.