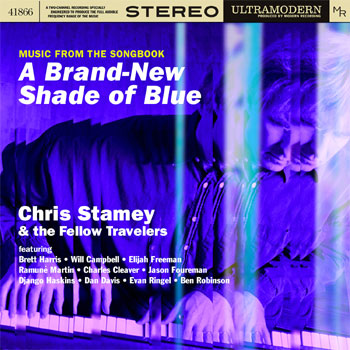 Chris Stamey first earned well-deserved fame for launching Car Records, the label that released Chris Bell’s solo single. His work with The dBs is, of course, extraordinary. His solo body of work, equally so. As a key part of the Big Star tribute concerts, he shone brightly as well. But with few exceptions, all of the aforementioned credits fall squarely into the rock idiom. And none of them fully prepares the listener for Stamey’s current musical approach.

The signs were there, if only clear in retrospect. Stamey’s compositional style has always leaned in the sophisticated (which isn’t to say too-arty) direction, and his emphasis on melody suggests the influence of some important pre- and non-rock forms. His 2013 album Lovesick Blues displayed even more subtlety and refinement than his previous work. And when I saw him live in Nashville (at one of the annual AmericanaFest events) his ensemble included a cellist. Very non-rock, that.

And against that backdrop, his 2019 album New Songs for the 20th Century shouldn’t have come as a major surprise. That release found him writing and arranging original songs in a style that would fit seamlessly into the Great American Songbook. And his latest, A Brand-New shade of Blue, follows on from that album.

The music on A Brand-New Shade of Blue focuses a bit more on instrumental work than did Stamey’s previous album, and the arrangements are more layered, textured, complex. But those qualities are presented in a way that’s so subtle – that word again! – that they seem simpler and more straightforward than they are.

Listeners who appreciate Stamey only for his uptempo dB’s work won’t be able to make heads nor tails of this release. “Je Ne Sais Quoi” is not a sequel to Sneakers’ “S’il Vous Plaît,” after all. But for those whose tastes extend well outside of rock – as well as those who are wiling to follow Chris Stamey on the journey to which his his muse calls him – there’s much to enjoy.