Album Review: Blaine Campbell and the California Sound – Under the Tidal Wave 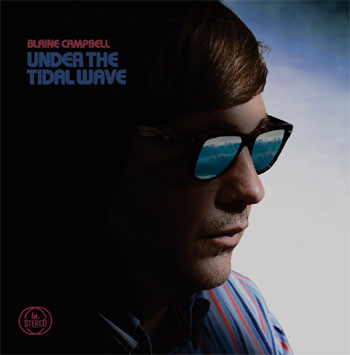 It’s no small feat to create a body of work that is simultaneously (a) chiefly inspired by the work of one particular artist and (b) distinctive and artistically significant on its own merits. The Spongetones did it with their series of Beatles-inspired albums, earning them both a spot on the Children of Nuggets compilation and a special place in my heart and LP collection. And more recently, The Explorers Club have done it with their superb Beach Boys pastiches – sometimes beating the Wilsons at their own game – though they’ve since widened their musical scope. They remain excellent and recommended in the most enthusiastic terms.

Blaine Campbell’s approach falls somewhere between the early and current Explorers Club: with Under the Tidal Wave, he has fashioned an album that’s unmistakably the work of a Brian Wilson acolyte. But he has managed the difficult and impressive feat of channeling those signature stylistic influences into something that’s both original and – most significantly – that oftentimes doesn’t sound at all like the Beach Boys.

Under the Tidal Wave is filled with chiming, memorable, good-timing rock ‘n roll. But familiar melodic progressions and chord changes are tweaked just enough to (a) keep listeners on their toes and (b) make fellow musicians express a knowing smile. From the chorus of the record’s opening cut, “Shoutin’ Don’t Count,” Campbell puts the strategy into practice.

The moody “Someday You’ll Be Mine” is a bit of an outlier: it’s an overt Beach Boys pastiche that captures the qualities that made pre-Pet Sounds era Beach Boys so special. But – again – it doesn’t copy their sound in a wholesale manner. The album’s title track is a lovely tribute of sorts to the Pet Sounds-era instrumentals performed by the Wrecking Crew. (I was going to write “inimitable” Wrecking crew, but Campbell imitates them quite well.

The album deftly moves away from tribute mode with “Blue dolphin.” The song’s lyrical concerns may fit into the SoCal vibe, but the plaintive melody doesn’t draw its character form obvious sources. Vaguely Indian percussion textures take the music another place. And this time a wordless interlude evokes The Association. The creamy, piano-centric “Our Life” features a lead guitar break reminiscent of George Harrison’s solo work.

“Almost Perfect” is shot through with sorrow and regret, with a lyrical approach reminiscent of – of all things – Pink Floyd’s “Eclipse.” It’s certainly emotionally resonant in this pandemic era, but it’s uncharacteristically morose in the context of the album’s overall themes. (That said, it’s among my favorite cuts on the LP; make of that what you will.)

“Where She Used to Play” is yet another song with lovely, thoughtful musical textures; the vibraphone splashed throughout the mix is a nice touch, and as usual, the vocal arrangement is flawless. Perhaps a nod to “Caroline, No,” Side Two’s featured instrumental is titled “Caroline’s Rainbow.” Thanks to its chromatic harp, sweeping strings, sonorous and reverberating electric guitar and oh-so-’67 drum fills, a listener new to Pet Sounds wouldn’t find it out of character with that album.

Under the Tidal Wave closes with the appropriately titled “Time to Say Goodbye.” It’s a bit of a tearjerker, with lovely bits of wood block, more chromatic and close harmony adorning its spare arrangement. It’s a fine way to finish a record.

Campbell’s core group is The California Sound, and all of the musicians – Campbell, David Cook, Chris Moore and Natalie Fratino – play multiple instruments. Guest musicians include notables Probyn Gregory and Jim Laspesa, among others.

Album production costs being what they are, it’s understandable when an artist opts for a blank inner sleeve. But it’s a sign of Campbell’s confidence in his music that he prints the lyrics. They read as well as they sound. But Under the Tidal Wave is designed as a listening experience, and you should indeed listen.