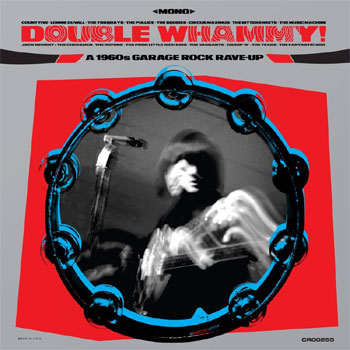 Nuggets did it first, and Nuggets did it best: the early ‘70s 2LP compilation curated by Lenny Kaye brought together a widely disparate collection of underappreciated songs from the ‘60s, applying a label to those songs that somehow made sense, even if The Amboy Dukes’ “Journey to the Center of the Mind” had nothing in common with The Cryan Shames’ “Sugar and Spice.” Decades later, Rhino expanded Nuggets into a 4CD set, one that joined a by then extensive roster of garage/psych compilations and series (Pebbles, Back From the Grave, etc. etc.)

One might think that by 2010, the metaphorical cupboard must have been swept clean. But the resurgence in vinyl means that the time is ripe for another similarly-themed collection, even if some of the contents will seem too familiar by half.

That’s the case with Double Whammy! A 1960s Garage Rock Rave-Up. Sixteen songs from the first garage era, the set is filled with some great music. But it seems to start unimaginatively: “Psychotic Reaction” by The Count Five is an indisputable classic, but who among the new release’s target market hasn’t already heard it a thousand times?

But wait: In an inspired move, the set opts for the mono mixes – the single versions – of the tunes rather than stereo. And that means that even though the familiar “Psychotic Reaction” is here, its a very different version than the one you’ll find on Nuggets. Mono, after all, is the right configuration for these protopunk tunes. Happily, all of the remaining thirteen tracks are far less well-known, and – unlike some comps of its stripe – Double Whammy! avoids stocking the platter with covers.

Farther along, The Music Machine shows up, and the compilers make another wise choice, including the excellent “The People in Me” rather than “Talk Talk” or “Double Yellow Line,” both included on the expanded Nuggets set. And the Vagrants are represented as well, not by their reading of Otis Redding’s “Respect” but instead by “I Can’t Make a Friend,” a tune that pushes the boundaries of garage rock. Again, good choice on the part of the compilers.

Is the music derivative? Sure. That’s a feature, not a bug, though. And there’s no denying the appeal of a deep obscurity like Lonnie Duvall’s “Attention.” Delightfully sloppy guitar solo? Check. Well-worn riff? Check. Even the white boy blues of The Torquays’ “Harmonica Man (From London Town)” is a treat. And the maniacal organ riffage on Circus Maximus’ “Short-Haired Fathers” is a thing to behold (the tune’s jangling Rickenbackers, assured bass work and close harmonies ain’t bad, either). The aptly-named Bittersweets combine stinging guitar leads with creamy vocal work.

The album offers up a few surprises. Chief among them is a spoken-word introduction from Bill Wyman; the tune that follows is quite good, as well. The horn-heavy “The Animal in Me” is slightly out of place here, but the demented combo organ solo pulls the tune well back into garage territory.

Double Whammy! ends with a decidedly strange tune, “This Calls for a Celebration” by The Fantastic Zoo. Vocal harmonies in a sort of sub-Association mold introduce the tune. But the uncluttered production values – and a perversely awful guitar solo – offset the “churchy” vocal parts. It’s a weak tune upon which to end a solid collection, but it doesn’t significantly diminish what is a worthy addition to the garage compilation canon.