Hello Hello: A Look Back at Caravan’s Second Album (at Fifty) 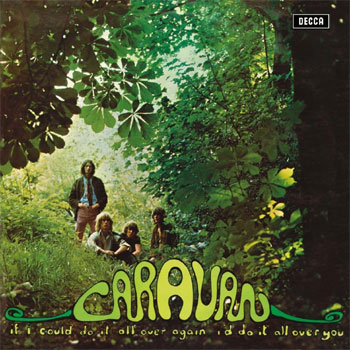 Rock fans who bought LPs in the late ‘60s and early 1970s may recall that some labels made use of the records’ inner sleeves as means to hype their other offerings. Certainly more elegant than the You-may-also-enjoy* hype that Capitol applied to back covers of Beatles LPs for a time, these full color inner sleeves often alerted music consumers to artists and titles they wouldn’t otherwise know.

Despite the labels’ efforts (I won’t say “best efforts,” because arguably they could have done more), many of the artists featured on those record sleeves failed to break through in the United States. One such band was Caravan. Exemplars of the Canterbury scene, the band’s music was a heady and intriguing synthesis of rock, English folk, progressive and jazz, all combined in a wonderfully accessible package. Caravan earned a great deal of well-deserved critical acclaim, but that didn’t translate into record sales in the States.

After a well-received 1968 debut (the self-titled Caravan, discussed here), the gorup found itself momentarily adrift with the collapse of its original label. Happily, they were soon picked up by Decca (London in the U.S.) and returned with their second LP, 1970’s If I Could Do It All Over Again, I’d Do It All Over You. (To save on typing, I’ll subsequently refer to the record as Over Again.)

While the group – which is officially still together in 2020 – would experience numerous personnel comings-and-goings, Over Again represents the second of three records made by the original lineup of Pye Hastings (guitar), Dave Sinclair (keys), Richard Sinclair (bass) and drummer Richard Coughlan.

The album opens with the title track, a tune in which the band sounds very much like fellow Cantabrigians Soft Machine. The “rhythmic” vocal line is in lockstep with the nonstandard time signature of the song, but the lyrics exist mostly as a means to draw listeners into what’s essentially an instrumental workout. David Sinclair’s trademark highly-distorted organ is at the heart of the piece; it sounds positively malevolent. The silliness of the repeated vocal phrase (“Who do you think you are?”) provides effective contrast with the knotty beat.

Things turn far more in an ear-candy direction with the lilting “And I Wish I Were Stoned / Don’t Worry.” Hastings’ gentle vocals and a lilting beat (still nothing like 4/4, mind you) characterize the number. Sinclair solos again, while Hastings plays a separate lead behind him, employing a very similar tone; it’s easy to lose track of which instrument is which here. The second part of the tune – the “Don’t Worry” section – is soaring prog rock with Hastings peeling off a lovely, if brief, solo. Lowering his voice to a whisper, he leads the band into a lovely and comparatively conventional piece of music. A memorable signature riff makes the tune something even more special. A brief (and somewhat ordinary) drum solo ends the track.

“As I Feel I Die” is exceedingly quiet for its first two minutes; when it finally bursts forth, it suggests what it might sound like if Dave Brubeck had pursued a rock direction. Another stellar organ solo features a jazzier tone and character reminiscent of Brian Auger. Things gets delightfully distorted toward the track’s finish.

The next track debuts what would become a defining characteristic of Caravan’s music: a suite of several songs/movements, strung together. “With An Ear to the Ground You Can Make It / Martinian / Only Cox / Reprise” runs nearly ten minutes, and distills all of Caravan’s virtues into a single track. The “You Can Make It” section, in particular feels like an embryonic version of the fully-realized “Nine Feet Underground” to come on the group’s third (and finest) album.

It’s easy to overlook the contributions made by bassist Richard Sinclair; his is a subtle approach, anchoring the music and adding color to it, yet rarely calling attention to itself. But his bass work is never less than exemplary, and a close listen to this suite underscores that fact. Guest musician Jimmy Hastings (Pye’s brother) turns in a lovely flute solo that evokes warm thoughts of Ian McDonald’s work on 1971’s underrated McDonald and Giles LP. And Dave Sinclair’s sparkling piano on the “Reprise” section sounds quite a bit like Tony Banks’ work on parts of Genesis’ Selling England by the Pound (1973).

Side Two of Over Again opens with “Hello Hello,” a tune that’s about as close as Caravan would (could?) come to a pop single. Another tricky time signature and some devilishly understated drum work from Coughlin are the song’s defining features. That is, until Dave Sinclair’s solos – interspersed with chorus vocals – take center stage. The tune ends with some playful bits of sonic mayhem.

The very brief “Asforteri” has a gentle, medieval folk vibe, with countermelodic vocal lines and a swirling keyboard part. But it’s merely a linking track to lead listeners into the album’s centerpiece, the epic “For Richard.”

“For Richard” starts out gently, with barely audible acoustic guitar strums, an uncluttered bass figure, and soothing nearly-wordless vocals. On the record, it’s noted as a four-song suite: “Can’t Be Long Now / Françoise / For Richard / Warlock.” A sweet flute part is joined by a gurgling bass line. Then all hell breaks loose, with a stinging, jazz-rock riff providing the bed upon which David Sinclair tears off one of his best-ever solos. Jimmy Hasting surprises by launching into a saxophone solo; the band provides hard-charging support.

As effective as Side One’s suite has been, “For Richard” represents the band’s finest moment so far. The tune continues to change and evolve; few bands pack so many worthwhile and memorable ideas into a single piece. Not a moment is wasted. Ten minutes in, Caravan reinvents itself into Deep Purple, with some of the heaviest organ riffage on record. That’s followed by Hastings soloing on guitar in a manner more like what one would expect from Black Sabbath … if Sabbath had a jazz influence. Sinclair and Hasting play over one another, but it never gets messy. Coughlan is finally given the space to unleash his skills in a dazzling display, albeit in support of the overall tune. “For Richard” ends on a showy note.

And while that showy note sounds like the end of Over Again, it’s not. Another very brief track, the bossa nova flavored “Limits” seems to exist to remind listeners that Caravan is at its heart a sophisticated, jazz leaning outfit. It just happens to be one that can rock like mad when the occasion calls for it.

Over Again spawned material that would find a prominent place in Caravan’s live repertoire for decades to come; “For Richard,” in particular remains a fan favorite and appears on many of the band’s (many) live albums. The most highly recommended of those, by the way, are the 2CD archival release The Show of our Lives: Caravan at the BBC 1968-1975 and the band-with-orchestra reading on Caravan and the New Symphonia (1974).

Over Again would get the expanded reissue treatment in 2001; a single-disc CD release featured four bonus tracks, including three demos and an outtake. The most notable of these is “Why?” which is a very different early vocal version of “And I Wish I Were Stoned.”

Like its predecessor, Over Again wasn’t a major commercial success in the U.S. market. And while the band’s commercial fortunes wouldn’t change with the release of 1971’s In the Land of Grey and Pink, that landmark album would earn the status of a progressive rock milestone; Rolling Stone pegged it at the #34 spot on its Greatest Prog Rock Albums of All Time list.