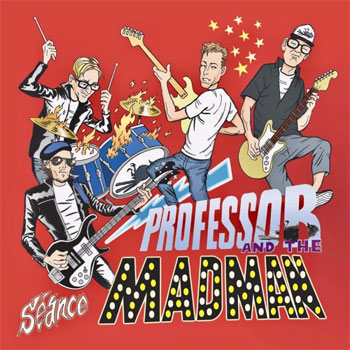 Don’t let the goofy name dissuade you from checking this one out: they may call themselves Professor and the Madman, but this group features some heavyweights. Led by Alfie Agnew and Sean Elliott, and – okay – you may or may not have heard of them. But the band also features a rhythm section of Rat Scabies (The Damned) and Paul Gray (Eddie and the Hot Rods and The Damned, again).

The music on Séance is highly tuneful, energetic stuff; taken purely at surface value, the tunes will appeal to anyone who appreciates the more nuanced, ambitious work of The Damned (i.e. the stuff in which Captain Sensible had a hand). But there’s much more going on here that intelligent, punk-flavored pop. Like The Damned, dig a bit deeper into the music of Professor and the Madman and you’ll discover a band with progressive tendencies. Not so much in the way they play – though that’s impressive enough – but in their approach to making an album. Séance, you see, is a concept album like the big rock bands did back in the day. The songs are conceptually linked.

The vocals are top-notch, shared between Agnew and Elliott (and often both at once). The songs are guitar-based, but there are tasty bits of keyboard here and there as well. “Time Machine” is sunny, bouncy pop of the highest order. And Paul Grey’s bass work is a serious highlight of an already excellent disc; he plays it like a lead guitar, but lays down a thick, low-end foundation at the same time.

There’s no radio play style between-songs dialogue a la The Universe of Geoffrey Brown, but Séance combines muscular rock and larger-project ambition, swinging for the fences in the way that Pete Townshend did with the (well, okay: abortive) Lifehouse project.

Feel free to ignore all of that and just rock out to these dozen tunes. Musical touchstones might include Sloan, Cheap Trick and other acts who meld powerhouse arrangement to tightly-constructed tunes with lyrics that don’t insult the listener’s intelligence. Séance is a contender for my favorite album of 2020.

Tags:professor and the madman, the damned