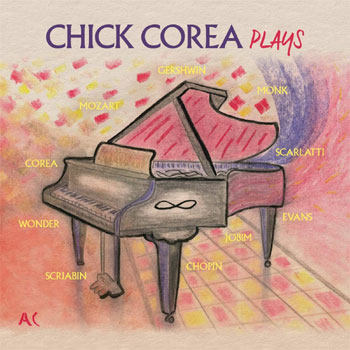 The pandemic and its resultant shutdowns may have (for a time) put a stop to live music performances, but after a brief pause in March and April, it seems to have done little to slow the release of new material. The manner in which albums can be created outside a traditional studio (and often by its nature, socially distant) means that the music keeps coming. Thank goodness. Live recordings captured prior to the shutdown are candidates for release, too.

The latter is what we have in Chick Corea Plays, a new 2CD set. As he liner notes booklet notes, the selections are “from a few recent concerts.” No specific sources or dates are given, and in the context of the album, none are needed. It’s a conceptual work, if you will: Corea works his way through compositions by musicians who have influenced and/or inspired him. And he juxtaposes seemingly unrelated pieces, highlighting the connections between them. Works include pieces by Mozart, Bach, Chopin, Antonio Carlos Jobim, Thelonious Monk, and some by Corea himself. Onstage with nothing more than a piano (and a mic, which he uses between songs to playfully engage with the audience), Corea presents more than 30 pieces across the set’s two discs.

Titles of a few tracks on the second disc suggest that Corwea engages in duets. Alas, no: he doesn’t need any help. And the character of the music varies widely, from lush, expansive and melodic to slightly atonal and improvisational, from sophisticated to, well, to children’s songs. In fact the set wraps up with eight numbers composed for the younger set.

Sound quality is flawless, but then listeners would expect nothing less. Chick Corea Plays is a lovely and accessible collection.

You may also enjoy my 2019 interview with Chick Corea. I certainly did.