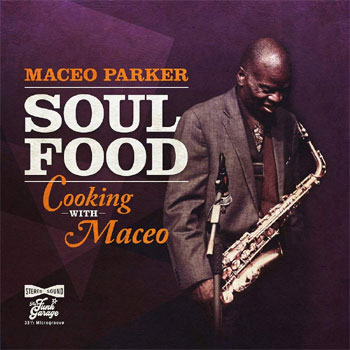 Maceo Parker is a towering figure in the soul/jazz/funk universe. He would be important if only for his work with James Brown, documented on many live and studio releases from the middle 1960s through the late ‘80s. But he’s done so much more: as a key member of Parliament-Funkadelic, Parker applied his talents in ever-widening musical circles. He’s also played on recordings by other acts, including Red Hot Chili Peppers, Living Colour, Bill Laswell’s Material, Bryan Ferry, Prince and Ani DiFranco (to name but a few). And since 1970, the always-engaged musician has somehow found time to record and tour under his own name as well. Parker’s latest release is a funk extravaganza.

Leading an ensemble that counts keyboardist Ivan Neville and Dumpstaphunk bassist Tony Hall among its ranks, Parker serves up a tasty platter with Soul Food: Cooking with Maceo. As is often the case with funk, groove is at the center of the music. That means that tracks like “Just Kissed My Baby” are built around a single riff or chord. But it doesn’t mean that the tunes are exercises in monotony; far from it. The chugging, deep-groove rhythm section provides a rubbery foundation upon which Parker (on sax and vocals) can apply his musical brushstrokes.

Parker takes a tried-and-true approach to material selection for the album. He draws from the best, including songs written by and/or closely associated with Allen Toussaint, Aretha Franklin, Prince, Dr. John, Les McCann and other greats.

A reading of Toussaint’s “Yes We Can Can” employs Parker’s brand of funk, with tight-but-loose horn charts plus upbeat and soulful chorus vocals. Parker’s sax weaves in and out of the arrangement, taking turns to shine and allow space for the other players. Parker’s own “M A C E O” is a two-chord vamp that features him engaging in spirited musical dialogue with the horn section. And a simmering reading of Eugene McDaniels’ classic “Compared to What” churns out energy on a level with (yet different than) McCann’s classic live reading on 1969’s Swiss Movement.

The New Orleans flavor of Soul Cooking comes through on all the tracks; a knowing cover of Dr. John’s “Right Place Wrong Time” is a highlight of the album. Parker and his associates give Prince’s “Other Side of the Pillow” a swinging, bluesy big band vibe. First made famous by Hugh Masekela (and then again by The Friends of Distinction), Parker’s laid-back instrumental version of “Grazing in the Grass” is one everyone can dig.

While Soul Food features plenty of superb musicianship on display, it’s not long on traditional “solos.” Instead the album is a showcase for ensemble work, a musical atmosphere in which each player can explore the hypnotic, beat-driven character of the music while digging as deep as he or she cares to. The various instrumentalists and vocalists complement each other, never seeming to compete. The net effect is densely layered but never noisy. At age 77, Maceo Parker has made an album that can stand alongside the best of what he has done before.