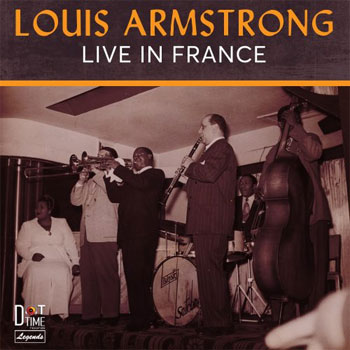 One of the most important and influential figures in the music of the 20th century, Louis Armstrong had a recording career that spanned from the early 1920s through 1970, the year prior to his passing. His winning and distinctive personality was a major component of his appeal, but his music remains at the center of everything he did.

Armstrong left behind a vast body of work, ranging from early sides with King Oliver’s band to his seminal work his own Hot Five and Hot Seven bands to later works. Albums released under his own name didn’t appear until the mid 1940s, and not with any regularity until 1954 or so. So the existence of previously-unreleased Satchmo from 1948 would be a major find.

And that’s exactly what has happened. Armstrong himself made a point of maintaining a personal archive of recordings – live concerts, radio broadcasts – and those eventually ended up at the Louis Armstrong House Museum in the Corona neighborhood of Queens, New York. Dot Time Record entered into an agreement with the Louis Armstrong Educational Foundation to release a series of previously unheard music under the banner of The Louis Armstrong Legacy Series.

The five albums in that series have been (or will be) released on CD, but limited-run vinyl versions have been pressed as well. A portion of the audio from the Live in Europe CD – specifically, Armstrong and his band performing on French radio from the Nice International Jazz Festival – has been released as an LP titled Live in France.

The audio quality is quite solid for a recording of its vintage, and Armstrong and his band (introduced as the Hot Five) are in fine form. The compere introduces the band leader and Earl “Fatha” Hines to rapturous applause, and the rest of the band members – clarinetist Barney Bigard, trombone player Jack Teagarden, bassist Arvell Shaw and Sid Catlett on drums – receive raves before they play a note.

When they do play, the music is very much of a piece with Hot Five recordings. After a spirited intro tune (“Muskrat Ramble”), the band leans into a slow, bluesy “Rockin’ Chair” with Teagarden taking the main vocal and Satchmo adding some “response” vocal bits.

“Rose Room” features Bigard as its primary focus; the tune is atypically varied for the period, featuring some excploratory soloing as the rest of the band gives Bigard – and then Catlett – plenty of space. “Panama” does the same for bassist Shaw. Armstrong takes his first significant spotlight with the final cut on Side One, “Sunny Side.” (It’s worth noting for purists that the track sequence on the LP differs from the CD, owing to the length limitations of the LP.)

The audio quality on “Sunny Side” is a notch lower than the tracks that precede it, and Side Two’s opener (“Mahogany Hall”) is a bit scratchy as well. But that won’t take away from one’s enjoyment of the performances. The weepy “Black and Blue” showcases Hines’ deft piano work, and provides Satchmo with another lead vocal spot. The band heads in a more energetic direction with the rollicking “Them Three Eyes.”

The Live in France LP concludes with “Royal Garden Blues,” in greatly improved sonic quality. The performances on the set were collected from two separate performances on consecutive days of the festival, which may account for the varying audio fidelity.

Armstrong introduces the instrumental “Dear Old Southland” as Hines launches into a stride piano intro, providing a lovely backdrop for Armstrong’s trumpet soloing. The rest of the band sits this one out.

Ricky Riccardi, director of research collections at the Armstrong Museum, penned an illuminating essay that appears on the back of the LP sleeve. Other volumes in the series (The Standard Oil Sessions, Live in Germany) document other notable Armstrong performances, but Live in France represents the earliest recordings in the series.