Brother Bluebird: Summer All Year ‘Round 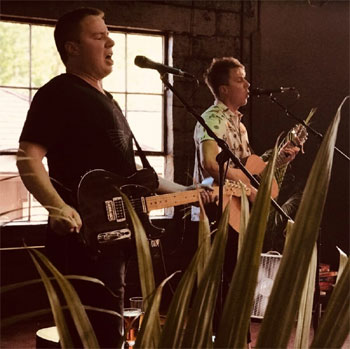 Asheville-based brothers Adam and Tim Reaves are Brother Bluebird, an Americana/folk/indie duo. They’ve been making music together most of their lives, but got serious about it in 2015. Their 2019 EP, Summer is equal parts tuneful melodies, creamy harmonies and thoughtful lyrics.

There’s something special about vocal harmonies by siblings; they seem to fit together in a way that non-siblings simply can’t. How did the two of you begin to sing and play together?

Adam: Our mother was my inspiration to sing; I remember watching her in choir and being mesmerized. She filled our house with music and taught us to sing when we were 3 or 4 years old. Singing was like an intimate language between us. To this day, the three of us will often break out into harmonies together singing along to the radio or singing hymns we all grew up with. There’s something almost indescribable about singing with the people I love; it feels ancient. This is what makes my heart beat faster, what makes me feel alive.

You’ve been making music together since you were kids. How and when did the professional side of music-making come about for you?

Tim: Adam and I had been in a few bands in high school and college. We’ve always wanted to have a presence in the music scene. After a long time living in different parts of the country, we came to live near each other in the summer of 2015 and talked about giving music another go. We started writing and booking shows, working on our skills, and trying to create a unique sound. We’re still just getting started.

What was your favorite thing about recording the Summer EP with River Whyless’ Daniel Shearin?

Adam: Daniel was patient with us and guided us to good decisions. My favorite part of making the album was being forced to finalize songs. Since we’re a duet, we can get away with constantly changing our songs – sometimes even the lyrics and dynamics – based on how we feel during a performance. But being in the studio forced us to settle on a version, record it, and really listen to the lasting impact of the song. Then we made tweaks and added some parts to the songs to get them where we wanted them to be.

You play all over Western N.C. Do you find that audiences in different places look for and/or value different things in your music?

Tim: Some people come close and listen to the lyrics and harmonies. Others just like the atmosphere of live music. Several songs reference specific places, like the mountains and gravel roads around Franklin and Asheville. So people get a kick out of that. We also write a lot about home: being home and wanting to be home. I think that resonates in places where people live temporarily for work or places where people come to create their own sense of home.

The new EP is dedicated to Ray Reaves. Tell me about him.

Adam: I really got to know my grandfather as a man in the last 10 years. When Tim and I started playing music as a duet, we would entertain him and my grandmother. He grew up in a large musical family, so I think listening to us made him feel proud and reminded him of his brothers and sisters.

We had different perspectives on a lot of things, but he taught me what deep love and commitment looked like. When my grandmother was diagnosed with Alzheimer’s, it nearly broke him. When she passed away, he was at her gravesite almost every day.

He always believed in us and helped fund Summer. He passed away before we could finish the album, but I think he would be proud.