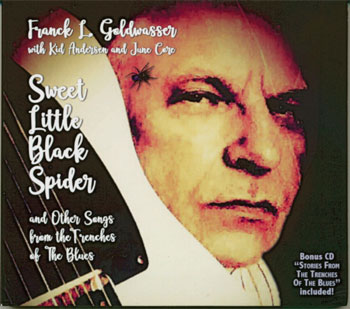 The 1980s were not a rich era for the blues. But the decade wasn’t without highlights. Artists like Joe Louis Walker and Arthur Adams were prominent on the scene. And older artists like Jimmy “Fast Fingers” Dawkins and Charlie Musselwhite were still wowing audiences and cutting records. And French-born guitarist Franck L. Goldwasser (then known as Paris Slim) was working as a sideman, backing up those artists and many others.His 1989 debut, Blues for Esther was nominated for a W.C. Handy Award. He’d go on to release several other albums. Gigging around the Bay Area, Goldwasser would in 2000 become a founding member of The Mannish Boys.

Eight years after Can’t Raise Me (his sixth album), Goldwasser returns with Sweet Little Black Spider, co-produced with by (and featuring) Kid Andersen at the latter’s Greaseland Studio. The album is a spare, lean-and-mean, no-frills affair that eschews production flourishes and gimmicks in favor of an unvarnished musical honesty.

Most of the thirteen cuts on Sweet Little Black Spider feature only Goldwasser (on guitar and vocals), Andersen on bass and drummer June Core. And even the three exceptions add only harp, electric piano or rhythm guitar (but never all three).

The album feels like an early evening blues set: It starts out competently enough, but the artist seems to loosen up, settle into a comfortable groove and play with more feeling and finesse as the album/evening unwinds. Goldwasser truly hits his stride on “She’s Hip,” and tears the roof off the sucker with stinging, swaggering blues-rocking on “Struggle in My Hometown.” Though Goldwasser earned his reputation as a guitarist, his wailing blues harp on “Struggle in My Hometown” is a highlight of the record. His fiery lead guitar makes an appearance, too, and the band – which had seemed to be holding back just a bit – is completely on fire here; Andersen’s bass lines contrast with Goldwasser’s licks in creamy Bruce and Clapton style.

The hits keep on coming. A tribute to the Parliament-Funkadelic guitarist, “Blues for Eddie Hazel” leans heavily on the wah-wah pedal for a searing, slow-burning instrumental workout. And in keeping with the rhythm of a live set, the “Don’t Give Up On Me, Baby” is an outing that oozes hard-won confidence. Andersen’s electric piano is tasty and (equally importantly) tasteful. Goldwasser takes one of his lengthiest solo spots here, and not a note is wasted.

The listener is left to wonder was “T.S.O.B.C.” means, as the track is an instrumental. But the cocky melody speaks volumes. After a farewell track (“Evil Wind Blowin’), the album ends with the high energy jump blues of “Nosluf’s Last Laugh.” A weak “bonus track” would have been better left off.

The album includes a second disc of spoken-word pieces. Subtitled “Stories from the Trenches of the Blues,” the disc is a series of eight tracks in which Goldwasser reminisces about Sonny Rhodes, Memphis Charlie, some “East Bay guy” and others while nondescript instrumental blues is played in the background. The tracks are intermittently interesting, but this second disc doesn’t add substantial value to the album as a whole, and it certainly does not constitute a reason to seek out this otherwise excellent album.

Note: This review corrects some unfortunate factual mistakes appeared in the original (print) version. I regret the errors. — bk