Three is the Magic Number: The Lickerish Quartet (Part 3 of 3) 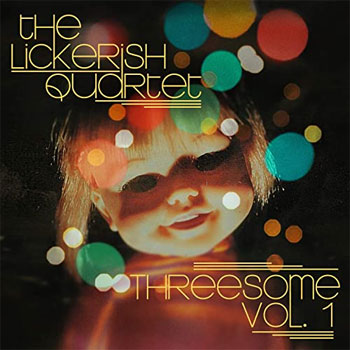 “We had twelve songs that were close to the finish line,” Manning says. “We took four that we felt worked together as a batch for this EP, finished them off with the mixing, and said, ‘Let’s reconnect with the fans the way I did with my pledge campaign in 2018, and let’s see what becomes of all this.’”

He’s cautiously optimistic. “If the fans want this, and if the whole process happens as well as we think it can, then it will justify the release of the next two EPs,” says Manning. “I’m happy to say, so far so good. The following EPs are slated to happen over the next year and a half.”

The other songs are in various stages of completion. “I could probably play you our rough mixes, and for most people, including myself, a lot of them are fine the way they are,” Smith says. But he, Dover and Manning will continue to work on those tracks until they meet their highest standard.

Those releases will be scheduled in between the members’ other projects. “In between the Lickerish Quartet EPs, I will probably have more solo EPs as well,” Manning says. That’s a serious workload, because as anyone who has ever heard anything with which Manning has been involved will know, finished recordings take a lot of time. “Our music is very labor intensive,” he acknowledges. “And that’s fine; I’m very happy with the results.” He laughs and muses that it would be nice if he could “knock out a song in a day or two,” but that has never been the case.

Tim Smith points out that releasing EPs has another benefit over albums. “We want to be able to have something new come out on a regular basis, so it’s not just throwing twelve songs at people all at once,” he says. He notes also that there is data suggesting that today’s music consumer only listens to the first three or four songs on an album before moving on to something else. So, Smith says, releasing four-song mini-albums is a way to “try to keep people interested in what we’re doing a little bit longer.”

For The Lickerish Quartet, the writing process is truly a collaborative one. “Obviously, somebody brought in the original kernel of the idea” for each song, Smith admits. The trio chose songs that seemed to work best when grouped together for each EP. None of the three writers made demo recordings before presenting his ideas to the others. “We all pretty much added our stamp to them,” Smith says. “Eric wrote lyrics to ‘Lighthouse Spaceship’ and ‘Fadoodle,’ which were both Roger music tracks. So it’s pretty collaborative.”

Lickerish Comes Alive?
Even when the planet reaches a post-pandemic era, the prospect of live performances by The Lickerish Quartet remains an open question. “There is a joy of playing live,” Manning admits. “And I know the fans really like to see that personal connection.” But the challenges to mounting a tour are substantial. The group’s arrangements are complex, and realizing the music onstage would require significant resources. “If there’s going to be any level of production, there’s got to be some kind of financial infrastructure,” he explains. “And that’s the biggest challenge.”

But live dates aren’t completely out of the question. Citing his previous experience touring Japan under his own name, Manning sketches out a scenario that maybe – just maybe – could work. Promoters there organized a tour that included large and small venues, and they managed to subsidize Manning’s touring costs.

“Thanks to their business sense, I not only covered all my expenses to rehearse and get a full band out to Japan, but I ended up actually pocketing a little bit of money at the end of the day,” he says. “And that was a huge surprise.” If something similar can be put together for The Lickerish Quartet – “in the States, Japan, England; I don’t care,” says Manning, then “Anything is possible. I think we’d all be game.”

But in the next breath, Manning cautions against getting one’s hopes up about live dates. “We’re not 22 years old. We’re not getting in a van and sleeping at my friend’s house, hoping that there’s 50 people at the show.” Having toured extensively with Jellyfish and other bands, he knows what the road can be like. Sometimes “you don’t take any [money] home, and you’re eating McDonald’s before you go to bed at night,” he observes. “Been there, done that. And that romance has long since passed.”

Tim Smith has a similar perspective. “We’re all really at a point in our lives where we’re not really willing to get in a van and go around and busk our songs out in little coffee shops,” he says. “And I don’t know that we have the kind of material where we could do that.”

Manning admits that wasn’t even the group’s first choice for a name, though he won’t share the unused possibilities. The process involved “going though hundreds of names and tons of research and finding two or three that we could agree on, only to realize that our first choice was actually in use,” he says. Then while perusing the film archives of director Radley Metzger, he happened upon a film he had all but forgotten about. “I was like, ‘Damn, that’s a good name,’” he says. “At least to me. Tim and Eric liked it, and we just went for it.”

Speaking of names, Manning emphasizes that there was never any thought of reviving his old band’s name for the new group. “That would be a discredit to all parties, to The Lickerish Quartet and to Jellyfish,” he says. “There was never the intention to do some kind of carbon copy or next-best thing.” Launching a new band with a new name brings a certain creative freedom. “I also didn’t want the project to be limited,” Manning says. “There are a couple songs – you’ll hear them on the future EPs – that are almost Supergrass-like punk-rock, and [you’ll think], ‘Wow, Jellyfish would have never done this!’”

Eric Dover, Tim Smith and Roger Joseph Manning are all proud of the work they did in Jellyfish. But they’ve moved on to new musical horizons with The Lickerish Quartet. And if memories of their first collaboration motivate listeners to discover their new music, that’s fine by them. “At the end of the day,” Manning says with a smile, “our personalities end up being in the camp of ‘post-Jellyfish-friendly,’ if you will.”

Come back soon for more from my conversations with Roger Joseph Manning and Tim Smith. — bk