Three is the Magic Number: The Lickerish Quartet (Part 2 of 3)

Manning says that the never-made third record would have been a double-LP that showcased each member’s songwriting, one side each. “Like Sloan’s Commonwealth,” Manning suggests. That 2014 double LP “still sounds like Sloan, but you really get each guy’s personality. And as a Sloan fan, I was just so envious that they were able to do that … and we weren’t.”

Manning says that when he got together with Dover and Smith in early 2017, the initial attempts at songwriting were very fruitful. “We thought, ‘Let’s get together and write, and see what happens,’” he recalls. “And it was clear to me [those songs] were what a lot of the song submissions for a third Jellyfish album would have sounded like.” 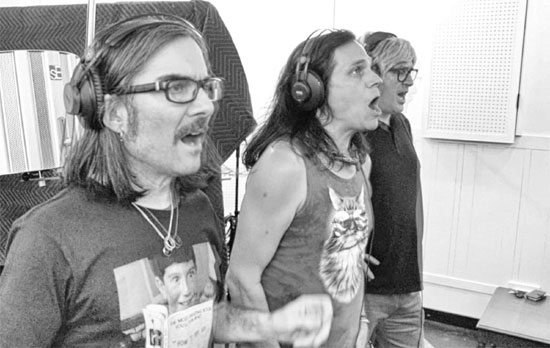 The “Spaceship” Takes Off
Jellyfish showcased a wide stylistic palette. But The Lickerish Quartet may prove to be an even more eclectic enterprise. “Honestly, we just came with no rules about it,” Smith says, other than “just writing songs that we liked for ourselves, and informing those songs as best we can.” He allows that some of the music on the new group’s first EP “will have some of the sound that people will remember from Jellyfish, but I don’t think that was the driving force.”

The care and effort that went into making densely-layered tracks like Jellyfish’s “Glutton of Sympathy” is something that has carried over to The Lickerish Quartet. That means that the recording process can be a lengthy one. “It took a lot of time to record a lot of the vocal things,” Smith says. “You have to be passionate about that, and you have to be willing to sit there for the hours that it takes.” He laughs and admits that it’s “not sexy to be sitting there, just singing one-syllable phrases over and over again, and multi-tracking yourself doing ‘ahh’s.’” But with its subtle echoes of Badfinger’s “It’s Over,” a new track like “Lighthouse Spaceship” showcases the group’s finely-tuned approach.

Those writing sessions in 2017 yielded a bounty of new material. “We wrote together for about three weeks, and came up with about 20 ideas,” Manning says. “I was like, ‘We’ve got enough here for two records! Let’s take the best ten or twelve and see what it would be like if we put our money and time into realizing them.’”

The trio called upon an old friend to help them with the drum parts. Jeremy Stacey has earned high regard for his work with a dazzling array of acts, including Ryan Adams, Robbie Williams, Steven Wilson, Noel Gallagher’s High Flying Birds and many others. Stacey has been a member of progressive powerhouse King Crimson since 2016. And even though he is an in-demand session musician, the British drummer jumped at the chance to work with The Lickerish Quartet.

“Jeremy was [already] friends with all of us,” Manning says with a laugh. “He said, ‘Oh my god: you guys have a project? You need a drummer? I will practically do it for free. I want to be on this record! What’s that going to take?’”

Another friend provided the final piece of the puzzle. Adam James is a longtime fan of the music Manning, Dover and Smith have all done in the past, and wanted to do what he could to help get The Lickerish Quartet going. “He said, ‘How do I get to watch you guys make a record?” Manning recalls. “We entered this business agreement with him where he fronted some funds to help us get the ball rolling.” James is credited as Executive Producer on the group’s debut release.

Adam James “got to be a fly on the wall,” Manning says. “And you know, you can’t do that with just everybody. We just basically laid out the rules and regulations and healthy boundaries, and I’m happy to say it worked out.” Manning says that the Executive Producer was “fun to have around. Frankly, he was a voice of an unbiased mini-critic, if you will.”

Manning credits Stacey and James as critical to the success of The Lickerish Quartet’s debut EP. “I don’t know how we would have done it without these people really bending over backwards to help us,” he says.

Though it’s long been clear that there is no chance that Manning and Andy Sturmer will work together again, Manning’s friendship with original Jellyfish guitarist Jason Falkner might seem to make him a good way of making The Lickerish Quartet an actual foursome. “That was never a thought,” Manning says. “Because he’s so immersed – and understandably so – in his solo career.”

And even if Falkner did have the time and inclination, it still wouldn’t happen. “I’ll tell you,” says Manning with a slightly nervous laugh, “Three cooks in the kitchen is plenty.” He makes it clear that he enjoys working with friends like Dover and Smith, but emphasizes that it is work. “Making any album can be an arduous and really challenging process for any [group of] well-meaning individuals. So I don’t know how we would have done this record with four or five members, be it Jason or anybody else. We barely got through with three!”