Three is the Magic Number: The Lickerish Quartet (Part 1 of 3)

A new group, The Lickerish Quartet, has released the first in a series of EPs. But the group isn’t exactly new, and its it’s not a quartet.

Ardent fans were devastated when Jellyfish broke up in 1994. In its comparatively brief time together, the group led by Manning and Andy Sturmer had crafted a pair of superb albums. Bellybutton (1990) and 1993’s Spilt Milk distilled classic rock influences like Queen, ELO and Supertramp through a modern sensibility, resulting in a high energy and tuneful sound that captured the zeitgeist of the ‘90s alternative rock movement. But the band’s music was more nuanced and carefully constructed than grunge, the prevailing style of that time. Jellyfish tunes like “Baby’s Coming Back” and “Joining a Fan Club” – the latter an ode to the KISS Army – may not have set the record charts alight, but for rock fans weaned on a diet of creatively ambitious ‘70s rock, Jellyfish exemplified a style that was nostalgic and new at the same time. 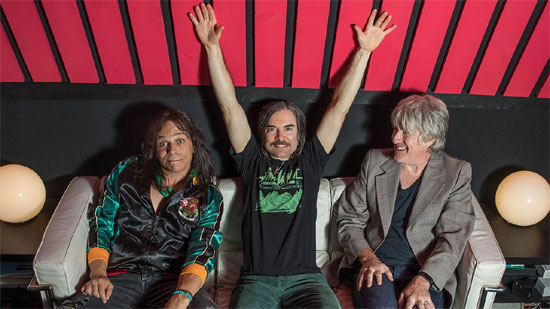 The Road to Reuniting
When the band’s members went their separate ways, each continued to make music that featured many of the characteristics that made their old group special. Though he was the front man in Jellyfish, since the breakup Andy Sturmer has chosen (and continues) to work behind the scenes, writing and producing for other projects including Japanese pop group Puffy AmiYumi and music for animated features.

Roger Manning’s first post-Jellyfish project was a collaboration with Brian Kehew, The Moog Cookbook. Outfitted as ‘70s era astronauts, the duo played wacky and inventive covers of rock favorites, realized completely on vintage analog synthesizers. The comedy rock project would release a pair of albums as well as a rarities compilation, and contributed to the soundtrack of the Robert A. Moog documentary/profile, Moog.

But Manning and the other former members of the group would continue to work with each other in various combinations. Guitarist – and recording artist in his own right – Jason Falkner left Jellyfish after Bellybutton, but he teamed up again with Manning in TV Eyes; more recently, both were members of Beck’s touring band. Eric Dover joined Jellyfish after the recording of Spilt Milk, but his experience working with Manning led to a subsequent collaborative project, Imperial Drag. That band released two albums.

Late-period Jellyfish member Tim Smith went on to work as a sideman as well, performing and/or recording with Sheryl Crow, Eric Clapton, The Finn Brothers, Paul Weller and many others. With Rob Aldrige he formed Umajets; that group released one album, 1995’s Demolotion; longtime friends Manning and Dover played on the album.

A few years ago, Los Angeles-based Manning reconnected with Smith, who lives in Atlanta. “Originally, I was just going to write with Tim,” Manning recalls. “More as a friend reach-out, reconnecting with him in a way that we hadn’t [since] Umajets.” Once they got talking, bigger ideas blossomed. And they both realized that Eric Dover could bring a lot to the project they had in mind. Manning recalls thinking, “Wouldn’t it be great to have Eric in the mix?” Dover agreed, and the new group came into being.

None of those earlier projects was an attempt to copy the Jellyfish sound, but everyone involved in The Lickerish Quartet admits that comparisons are inevitable. “We’re the same,” says Smith, “in that we’re the same people with the same sensibilities about what we like about songwriting.” He likens the situation to people who have grown up together, sharing the same set of words in their vocabulary. “They can speak to each other in a certain way without having to explain to each other too much,” he says.

And The Lickerish Quartet does bear some similarities to Jellyfish. “Obviously, we weren’t getting back together to play a totally different kind of music,” Smith admits. “We’re not trying to be a fusion band!” He says that the musical sensibilities remain the same, but emphasizes that he, Manning and Dover “were never trying to be Jellyfish Part Two.”

Manning says that while “you could tell there was some Jellyfish” in the music he and Dover made with Imperial Drag, “it was its own thing, and we were deliberately headed into a different direction.” Both of those observations apply to The Lickerish Quartet as well. “But I’d be very surprised if we don’t pick up where we left off,” he says. “Because while I hadn’t been in touch with Tim and Eric a lot in our time apart, it was pretty clear to me that those are our roots. That style is in our DNA.”

Still, listeners should resist the temptation to make too much of the fact that The Lickerish Quartet features three former members of Jellyfish. For starters, there’s one very fundamental difference. In the ‘90s band, all of the music was written by Sturmer and Manning. But in the new group, all three members contribute. “We all chipped in on each other’s songs,” Smith points out. “That never happened in Jellyfish.”

Manning agrees. “The whole Jellyfish break-up was such a tragedy,” he says. “And one of the tragedies was that it was very clear to me, while touring [in support of] Spilt Milk, that Eric Dover and Tim Smith were both very good singer-songwriters in their own respect.” In fact, he says, as plans were being laid for a third Jellyfish album, he hoped to put those talents to work. “Alas,” he says, “that was never to be realized or experimented with, because Andy and I ended our relationship, personally and professionally. And it was always like, ‘God, what a crime!’”