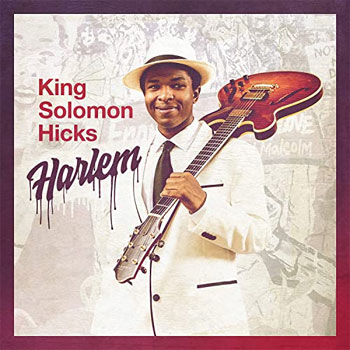 Opening with Leon Russell’s “I’d Rather Be Blind” underscores the point that King Solomon Hicks is no blues purist. His reading of the song – first cut by Freddie King in 1972 on his Russell-produced Texas Cannonball – owes a debt to the kind of blues played by the Mad Dogs and Englishmen aggregation. And Hicks’ cover of the blues chestnut “Every Day I Have the Blues” suggests the manner in which Derek & the Dominos might have played it.

The lyrics of the dramatic “What the Devil Loves” may be preachy, and Hicks renders the tune in a gospel-blues style, but his light touch means that the song never feels overwrought. And its chorus may just move the listener to sing along.

Hicks isn’t a prolific artist; in a decade he’s only released three albums. And only two of the 11 cuts on Harlem feature a Hicks co-writing credit. But his infectious “421 South Main” is an instrumental guitar workout that strongly evokes Freddie King’s best work. And when he shifts gears into a jazz-blues bag for Al Kooper’s “I Love You More Than You’ll Ever Know,” he does so credibly. Hicks’ three guitar parts on the track are a study in contrasts: there’s a tantalizingly brief introduction in a Wes Montgomery style; an impassioned fuzztone-laden lead that subtly reinforces the song’s emotional content; and some gentle, barely audible rhythm work.

But then Hicks shifts gears slightly uncomfortably. Going from Kooper’s love song to the don’t-want-to-see-you-again sentiments of “Headed Back to Memphis” may not be an example of inspired track sequencing, but the latter’s instrumental work is appealing.

A horn-heavy deep funk instrumental reading of Gary Wright’s “Love is Alive” takes the song in a direction radically different from its original all-synthesizers arrangement on Wright’s 1975 LP The Dream Weaver. Hicks scores points for inventiveness here; venturing far beyond the blues, he nonetheless pulls the material back in that direction.

“Have Mercy on Me” is one of two Harlem tracks written by Frankie Vinci. Vinci’s tunes make little pretense of being blues numbers. But once again Hicks and his sidemen bend the material to their will, infusing it with enough blues to satisfy the faithful and enough pop to appeal to a wider audience.

Hicks’ second co-write on the album is “Riverside Drive,” a slow blues that recalls Peter Green-era Fleetwood Mac as much as anything else. The manner in which the song fades out suggests that the band kept on playing. But while “It’s Alright” has its charms (including Hicks’ dependably fiery guitar work), in the end it evokes memories of rote ‘70s power-blooze a la Foghat, Bad Company and the like. Happily, Harlem ends on a powerful note with a heartfelt cover of Willie Dixon’s “Help Me.”

For listeners who find blues too bluesy, King Solomon Hicks’ Harlem could serve as a listener-friendly entry point into the genre. An album that occasionally seems designed to play to the widest possible audience, Harlem still manages to avoid too many missteps, resulting in a solid collection of songs.