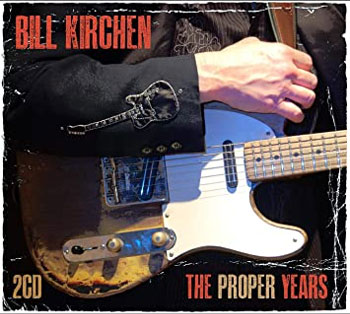 What to make of possible hyperbole? When I read that Bill Kirchen is known as “The Titan of the Telecaster,” I wasn’t at all sure what to think. At first I thought I was wholly unfamiliar with his work. A cursory big of digging reminded me that he was a longtime member of Commander Cody and His Lost Planet Airmen. Okay, good enough; now listen to this 2CD best-of collection drawn from his decade’s worth of album for the Proper Records label.

That era saw the release of six albums, kicking off with the playful, good-natured riff on his reputation, Hammer of the Honky-Tonk Gods. It continued through his last album of new material to date, 2016’s Transatlanticana.

As the titles make plain, Kirchen’s work falls squarely into the country/Americana bag. But not unlike another guitar slinger – Junior Brown – his music has a wide appeal that draws in fans whose tastes might not ordinarily lean in a twang direction. His sense of humor shines through many of the tunes, as telegraphed by song titles: “Rockabilly Funeral,” “Get a Little Goner,” “Mama Hated Diesels.”

He traffics in pathos, too; for a taste, just give a spin to the crying-in-my-beer “Skid Row in My Mind.” His brief solo on that tune is a thing of taste and beauty, smoldering where other tunes display fireworks.

And his skill at interpreting the works of others is well documented on The Proper Years as well. He tackles Dylan’s “It Takes a Lot to Laugh, It Takes a Train to Cry,” and he digs into “Devil With a Blue Dress” in a way that successfully reinvents the tune. “One More Day” feels like Bob Willis crossed with Stéphane Grappelli.

At nearly 40 tracks, The Proper Years collects nearly everything of value from the albums Kirchen made for the label. And for those (like me) who don’t know much of his work, consider that if you enjoy Nick Lowe’s c&w-leaning material, or Junior Brown’s guitar pyrotechnics, or just a good boot-scootin’ tune, you’ll delight in this set.