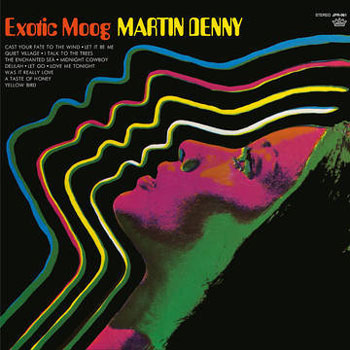 Introduced in the middle 1960s, Dr. Robert A. Moog’s invention – the Moog Modular synthesizer – changed the musical landscape. Groundbreaking releases like Switched on Bach made it plain that the formidable instrument was more than a cold mass of technology, more than a gimmick. But that didn’t stop a rush of artists charging into the breach to exploit the Moog’s more gimmicky possibilities.

A whole cottage industry sprang up in the wake of Walter (later Wendy) Carlos’ recording using the Moog. Some of it was indeed serious. Some artists sought ways to incorporate the new instrument into their existing musical arsenal; others developed wholly new approaches to music using the Moog.

The Beatles made intelligent use of the Moog on Abbey Road, and George Harrison released a solo album (of some dubious provenance, it must be said), Zapple Records’ Electronic Sounds. Others incorporated it into a decidedly pop context; Dan Lacksman’s series of early ’70s albums are an exemplar of that style, and his “Skylab” track is a clear antecedent to the work of later artists such as the French duo Air.

By the time the Moog debuted, Martin Denny had long since established a musical approach of his own, often called exotica. Making ambitious use of the then-new stereo spectrum, Denny’s albums included not only stereo panning but ersatz bird calls, unusual-to-Western-ears percussion and other innovative sounds. There was, to be sure, an element of kitsch to his work, but albums like 1959’s Quiet Village – released amid a flurry of activity that brought forth no less than 11 albums in a space of less than four years – retains its charms to this day.

So when the Moog came out, Denny (dubbed the “father of exotica”) seemed a natural fit. In fact he was. Recorded in 1969 near the end of his prolific run of releases (though there’d still be scattered others to come), Exotic Moog applies Denny’s ostensibly organic musical worldview to a very electronic instrument.

As was often his approach, Denny wouldn’t compose new material for Exotic Moog. Instead, he bends the works of others to his own goals. That means that listeners are treated to Moog-tastic readings of “A Taste of Honey,” Vince Guaraldi’s “Cast Your Fate to the Wind” and Denny’s own mega-hit, “Quiet Village.” Using the capabilities afforded by an 8-channel multi-track studio, Denny overdubs the various instrumental parts himself, using different textures and timbres of the Moog.

Despite its electronic nature, Exotic Moog is very much a piece with Denny’s earlier exotica. A consummate musician, his playing on the album demonstrates a remarkable understanding of the nuances of which the Moog is capable. And while the album fits in well with some of the kitschier exponents of the Moog craze, in his hands, the Moog is expressive and never silly.

Well, almost never. With its high-pitched, trilling synth runs, “Delilah” got my little dog quite upset. And I wasn’t a huge fan of its faux-Western clip-clop rhythms, either. But that track stands out among the 11 others, all of which fall somewhere between amusing and fascinating … and consistently entertaining. You may think that disco didn’t come around until the mid 1970s, but here’s Martin Denny’s spirited 1969 reading of “Love Me Tonight (All Fine Della Strada)” to call that belief into question.

Exotic Moog isn’t a completely synthesizer-based recording. Lerner and Lowe’s “I Talk to the Trees” is re-imagined as something halfway between easy listening and bachelor pad exotica (which, I’ll admit, aren’t worlds apart). And, like many of the album’s cuts, it features a standard rock band – bass, guitar, drums – providing support. But even then, Denny’s not content to lay down a single melodic line. There’s lots going on, with the instrument evoking thoughts of Theremin, blowing wind, chirping birds and all manner of otherworldly sounds. “Yellow Bird” rocks, and “The Enchanted Sea” … well, it enchants.

The whole album’s like that. Which begs the question: Why was Exotic Moog so hard to find for so many years? It’s been out of print for ages. Thanks, then, to the folks at Jackpot Records, who have seen fit to reissue this gem (on freaky salmon-orange vinyl, no less) for the 21st century. Fans of Moog-mania, exotica or just well-crafted instrumental pop are encouraged to lay hands on this delightful disc.

Postscript: On discogs.com I found the following comment. Make of it what you will. “In 1997, in an interview with Dana Countryman, Martin Denny confessed he never played a note on the Exotic Moog album. Clark Gassman [credited as the LP’s arranger — bk] played the Moog in a certain Denny style here. And still a sought-after piece it is.