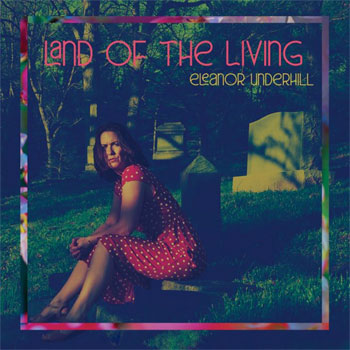 In late 2018, Eleanor Underhill released her debut solo album, Navigate the Madness. While she didn’t – and still doesn’t plan to – abandon her popular and widely admired duo Underhill Rose, the Asheville musician made plain her desire to expand her musical vision to encompass a wider vision. But even the eclectic collection of songs on her debut might not prepare listeners for the great creative leap forward that is her newest record, Land of the Living. Eleanor Underhill and Friends celebrated that album’s release with a live stream concert August 6 and an online video premiere the next evening.

While Underhill Rose has charted a consistent (and critically acclaimed) musical path, for her solo work, Underhill takes a different approach. Land of the Living represents a radical yet surefooted departure from the Americana textures for which she was once known. But rather than heading in one specific new direction, the album boldly embarks upon multiple journeys; listeners may detect the influences of rock, jazz, chillwave, trip-hop and ‘90s rhythm and blues. In that sense, Underhill establishes herself in a category alongside artists like Suzanne Vega and Todd Rundgren, musicians whose work steadfastly resists categorization.

“I grew up listening to everything,” Underhill explains. “I played trombone in the middle school band, and I really got into jazz. I grew up listening to all the folk revivalists, and The Beatles and The Rolling Stones.” The first album she purchased was Janet Jackson’s Rhythm Nation 1814. and she later went through an extended Grateful Dead and Phish phase. “And all these different influences have seeped in,” she says. Land of the Living is the result of Underhill giving herself “the permission to just have fun and not worry about genre.”

Underhill emphasizes that her love for Americana hasn’t dimmed a bit. “But I get bored, just like anyone else,” she says. “And I am following the joy. If something is fresh and new and exciting for me, I’m trying to lean into that.”

While her collaboration with Molly Rose in Underhill Rose is democratic in nature, Underhill’s solo work – billed as Eleanor Underhill and Friends – finds her applying a kind of benign control in the studio. “There’s a lot of me saying, ‘Just do what you feel, just have fun, just react,’” she says. Still, she keeps the reins on production “so that I can say, ‘Is it okay if I play around with what you did?’”

In practice for Underhill, that often means doing post-production editing on recorded parts, assembling a finished product using a cut-and-paste method not unlike the approach used by Miles Davis and producer Teo Macero on the landmark Bitches Brew album. Underhill enjoys the freedom that this approach brings.

Land of the Living combines that edgy methodology with a more traditional approach to recording. “I think there is something beautiful and important to raw performances,” Underhill says. “However, I’m also a big fan of sampling, where sounds have been manipulated and pulled out of context. There are things that I come to in my solo-focused space that I could not have come to if someone was leaning over my shoulder.”

And the musical curve balls keep coming. Banjo is the instrument with which Underhill is most readily associated (and most often photographed). And while her banjo playing is featured on Land of the Living, it’s decidedly not a centerpiece of the record. Instead, listeners are treated to displays of the multi-instrumentalist’s musical expression on sitar, synthesizer and even Mellotron.

Composing songs on synthesizers instead of a banjo often yielded very different results, Underhill says. “It broke me out of some habits that I might have gone to, and that’s exactly what I wanted. I wanted to push myself to write in a different way; that was a big part of the whole thing.” But she doesn’t think the music is too different from what it might have otherwise been. “When you get right down to it, a song is the lyrics and the melody,” she says.

There are a lot of keyboards on Land of the Living. “All the synths, Moog, piano … all of that is me,” Underhill says. And technology figures into the album in another way: the day after the live stream concert, Eleanor Underhill and Friends will premiere a long-form video of the entire album on Facebook

Underhill allows that her solo work’s wide-scope approach brings challenges. “I’m at that moment now where it’s hard to [promote] the album, because there are so many different types of songs on it,” she says. But she knew she had to follow her inspiration where it took her. “I knew I couldn’t hold myself back,” she says. “I would not feel as proud of the product if I tried to limit myself.”

Note: An edited version of this feature appeared previously in Mountain Xpress. To read more from my conversation with Eleanor Underhill, go here.