Big Bill Broonzy’s musical influence is incalculable. And even though he recorded prolifically, a new archival release is an important addition to his body of work. 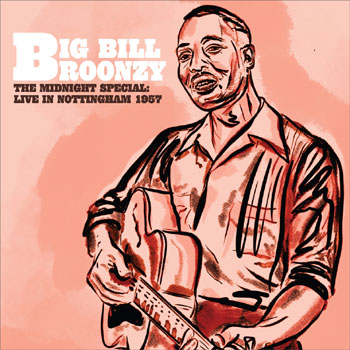 A solo acoustic performance, Midnight Special: Live in Nottingham 1957 showcases Broonzy’s myriad assets. Foremost among those are his fine and expressive voice, his peerless selection of material, his solid guitar work and – perhaps most of all – his folksy and warmly engaging personality. Onstage in England, the American musician clearly commands the respect of his (presumably mostly white) audience at a time when he would have been exceedingly unlikely to find such a warm recption at home.

That’s underscored by his choice of opening number, an updated reading of the traditional “This Train,” with lyrics that address Jim Crow and other social ills. As the set unfolds, Broonzy introduces each of the songs with brief (and sometimes a bit lengthier) monologues that only add to their enjoyment.

The songs run the delightful gamut from spirituals to playful, pop-leaning bluesers, to saucy country blues numbers (the original “Wilie Mae”) to folk standards rendered in Broonzy’s inimitable style. Twelve of the record’s tunes are sourced from the concert itself, while two (“Swing Low, Sweet Chariot” and “Goodnight Irene”) were recorded backstage. The highlight, though,  is “Glory of Love,” a pop classic reinterpreted Broonzy-style; the audience goes wild.

The sound is a bit on the tinny side, but for a live recording made more than sixty years ago, that’s to be expected. And the fidelity doesn’t detract from the record’s enjoyment. A mere three months after the performance documented on Midnight Special, Broonzy was diagnosed with (throat or) lung cancer; he died less than a year later.