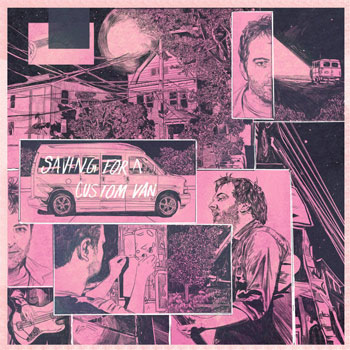 Grammy Award-winner Adam Schlesinger died on April 1 of complications from COVID-19. The singer, songwriter and multi-instrumentalist gained fame for his work as a member of power pop band Fountains of Wayne, indie pop combo Ivy and other projects. He also wrote music for other artists and for television and films. Among his most celebrated compositions is the theme song for the 1996 comedy-drama That Thing You Do!

Three weeks after his passing at age 52, the three surviving members of Fountains of Wayne – Chris Collingwood, Jody Porter and Brian Young – reunited for a livestream musical tribute to Schlesinger, a charity event to raise funds for the New Jersey Pandemic Relief Fund.

Another tribute/fundraising project in Schlesinger’s memory is the various-artists set Saving for a Custom Van. Released by Bay Area label Father/Daughter Records, the album features 31 artists turning in their own versions of songs written and/or performed by Schlesinger.

Saving for a Custom Van is an eclectic set, one that demonstrates the wide stylistic breadth of Schlesinger’s creative output. And the featured artists – an equally diverse lot – dig into the material in a variety of ways. Tanya Donnelly and Gail Greenwood cover Ivy’s “Undertow” in an arrangement almost identical to the original. Kindred musical spirits Nada Surf deliver a chiming, memorable cover of “Sick Day” that – unsurprisingly – sounds more like Fountains of Wayne than anything else on the album.

The recordings that stray the farthest from the originals tend to be the most interesting. Rachel Bloom’s “Stacy’s Mom” mines the singer-songwriterly character within the Schlesinger-Collingwood composition. And while it’s somewhat faithful to the original, Ethan Eubanks’ reading of “Troubled Times” does the same for that song.

Los Angeles pop group Cheekface gamely assumes the thankless task of covering “That Thing You Do!” a song that arguably cannot be improved upon. Still, their slightly pop-punk arrangement isn’t an embarrassment. Somewhat unexpectedly, FoW guitarist Porter tackles an Ivy tune, “Four in the Morning.” He gives the song a more expansive, atmospheric feel; it’s one of the best tracks on the tribute release.

Intentionally or not, a melancholy feeling pervades most of the tracks – even the upbeat ones – but that makes sense when the music is made by friends, associates and fans of the greatly missed musician.

All proceeds from the release go to MusiCares’ COVID-19 Relief Fund, an initiative designed to help those in the music community contend with the pandemic crisis.