Album Review: Turnstyles – Cut You Off 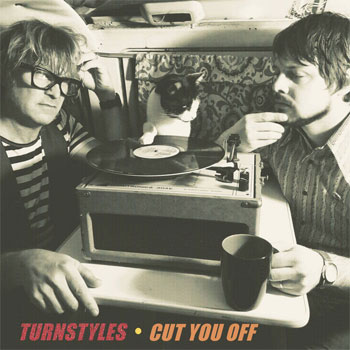 Members of Jack Oblivian’s band, Seth Moody (guitar) and Graham Winchester (drums) are Turnstyles. From Memphis, this group/duo deals in the rocking yet cheerfully loose vibe that characterizes many of the Bluff City’s rock legends. Listeners will hear echoes of Tav Falco, post-Big star Alex Chilton and the like, but Turnstyles are a shade or three less shambolic than those artists.

Cut You Off sports a decidedly lo-fi, tinny sounds, but it’s exactly what the music demands, so – I nthis case – lack of fidelity isn’t a negative. Neither is Turnstyles’ lack of a bassist; while the guitar-and-drum paradigm would seem to have long since been played out, with everything of interest long since having been done to death. But these guys deliver the music with such spirit and guileless authenticity that it deserves another look/listen.

As appealing as their raggedy vocals can be, it’s tracks like the largely instrumental (save for occasional “whee-oo” chants that might remind some of Gary Glitter) “Disgusta.” There’s no pretense here, no artifice, no filigree. Cut You Off is just stripped-down, r&b-charged rock ‘n’ roll. Tunes like “Fish Taco” sure ain’t poetry, but then that’s not the point. If your idea of Memphis rock ‘n’ roll has more to do with “Bangkok” than “The Ballad of El Goodo” – or if there’s room in your musical world for both approaches – then you’ll delight in Turnstyles.

But wait: there’s more. Just when you think Cut You Off is going to be all-elemental-all-the-time, comes along a track like “Vivian,” a catchy verse/chorus/solo number. And the title track sounds like what might happen if you boiled Los Straitjackets down to their essence (and added some yelps). Listing to this LP, it’s as if progressive rock, grunge and punk never happened (well, okay, maybe punk did) and that instead, rock ‘n’ roll proceeded forth form the most energetic strains of the Sun Records era. And there’s not a thing in the world wrong with that.