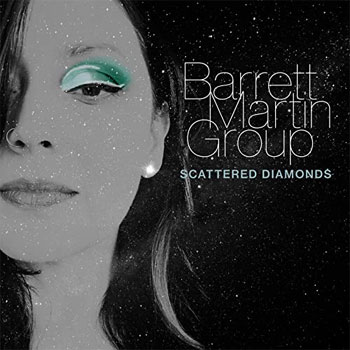 In spring of last year, I reviewed Songs of the Firebird, a resonant and deeply intriguing album that could be described in part as a jazz album made with non-jazz musicians helping out. That record leaned in a bit of an avant-big-band direction. This newest release from the group is even more accessible. Scattered Diamonds walks that thin line between musical adventurousness and ear candy. Leader Martin plays both conventional drums and tuned percussion, and that deeply musical approach to percussion informs all of the album’s 17 tracks.

Martin wrote or co-wrote all of the pieces, and when a track features a co-credit, the collaborative composer is also a musician on that track. So alongside the fetching hard bop/soul jazz melodies of cuts like “Roll the Bones,” you’ll find Hindustani vocals, Iraqi oud and more.

And if your taste in jazz ventures into the kinds of things John McLaughlin did with Miles (or on his own), you’re in for a treat. “Way Down” sounds like Bitches Brew-era fusion, bent toward melody. Even Dave Carter’s trumpet work evokes thoughts of Miles, though (happily) he plays more notes.

Soundgarden’s Kim Thayil returns for a track (“The Firebird”), and the world vibe is emphasized not only through that oud (on “The Fountain” and “Alhambra”) but also in Martin’s deft use of bata drums, gamelan, tambura and the like. In fact, in places the peppy, playful “Alhambra” is reminiscent of Herb Alpert and the Tijuana Brass(!) And keeping that cross-genre feel going, “Firefly” is subtly, warmly reminiscent of Pink Floyd’s “Us and Them.”

But there are nods in a classic jazz direction as well, like the delightful “Swinging’ on a Moonbeam,” with its tight-formation brass and gurgling Hammond. As the back cover of the sleeve makes plain, each and every song has a featured player. And their contributions always sound and feel wholly integrated; it’s never case of some backing musos and a star turn.

Scattered Diamonds just might be the ideal jazz album: one that can impress lovers of the form while drawing in those with mo particular previous affinity for jazz. If, for example, Kamasi Washington is already on your musical radar, Barrett Martin Group should be as well.