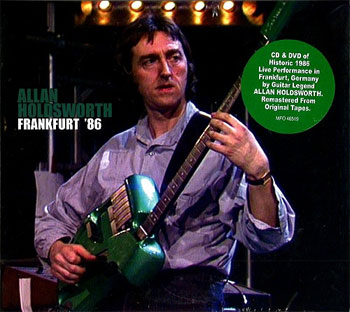 Being an early adopter is a risky pursuit. Godley and Creme built an entire album (the triple-LP Consequences) around their Gizmo, and disaster ensued. Some of the earliest releases with the Synclavier were stiff and mannered. But fusion guitarist Allan Holdsworth was having none of that restraint when he dove headlong into the world of the Synthaxe.

That idiosyncratic instrument would cause him no end of trouble onstage, but not only did Holdsworth forge ahead, but he created lasting music with the odd and ungainly beast at its core. He made extensive use of the Synthaxe beginning with 1986’s Atavachron, and would continue to employ it on future releases.

And it was around the time of Atavachron’s release that Holdsworth and his band – multi-instrumentalist Gary Husband on drums, bassist Jimmy Johnson and keyboardist Kei Akagi – appeared at the Deutsches Jazz Festival in Frankfurt. As part of an ongoing archival release series from Manifesto Records (sanctioned by Holdsworth’s estate), Frankfurt ‘86 is a CD+DVD document of that performance.

Holdsworth makes the very electronic instrument sound almost acoustic at times; on sections of “Letters of Marque” the Synthaxe sounds quite a bit like a classical guitar. Other times it takes on a more conventional character. As Husband’s liner notes explain, the guitarist (synthaxeist?) struggled with technical problems during the gig, but he persisted. And the results speak for themselves.

The set list features only three songs from the then-new Atavachron; the other tracks draw mostly from his three earlier releases, I.O.U. (1982), 1983’s Road Games and 1985’s Metal Fatigue. Applying a jazz mindset, Holdsworth allows plenty of space for his associates to display their myriad talents: Husband’s dizzying solo work on the extended “Letters of Marque” – twice the length of its studio counterpart – is a highlight of the set. If for no other reason that it’s the first live album to document this period of Holdsworth’s work, Frankfurt ‘86 is an essential purchase for fans. But for anyone interested in the nexus where fusion …  er … fuses with technology – live and without a net – it’s well worth experiencing.

UPDATE: Gary Husband comments: “[I]t’s fair to reiterate the whole band — not only Allan — had extreme difficulties throughout this disastrous gig! It’s a miracle and an achievement any of this is of any quality at all. So much so, the thing I think this video really pays testament to is everyone’s recovery ability, sheer determination and to pull together against many odds!”

You may also enjoy my feature based on my interview with Allan Holdsworth, one of the very last interviews before his passing in 2017.