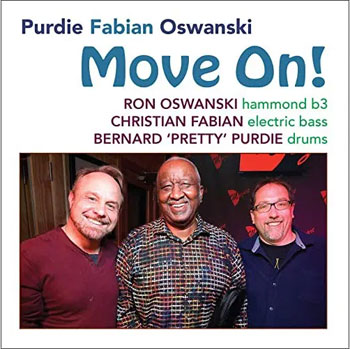 Bernard Purdie is one of the most influential drummers in music; his style has made a serious impression on players well outside his chosen genres of jazz and funk. And while at age 81 he has long since passed the nothing-left-to-prove milestone, here he is with two younger players, making an album of high-energy organ trio jazz. Christian Fabian lays down a thick bass groove, while Ron Oswanski delivers the melody on electric organ.

Most of the tracks on Move On! are composed by Fabian, and they cook. The covers draw form the very best, including Duke Ellington (“Love You Madly”) and Miles Davis (“So What”). Julia Ward Howe’s “Battle Hymn of the Republic” has long been a jazz staple, and the trio turns in a tasty reading.

The album swings: sometime gently, other times forcefully. This isn’t avant-garde stuff; it’s accessible, tuneful, in-the-pocket grooving music. Hardcore jazzers will find plenty to like when Fabian lays down an extended bass solo on “BPP Blues,” and deep funk is showcased on “84-85.” The trio goes full speed ahead on the intricate “Got Groove (pt.2)”

While “Can’t You See (You’re Doin’ Me Wrong)” drifts perilously close to smooth jazz, when it’s done this well, there’s no reason to complain. A simmering, hypnotic version of Davis’ “So What” closes the album in style. Move On! has the sound and feel of three musicians communicating on the highest level, and having fun doing it.