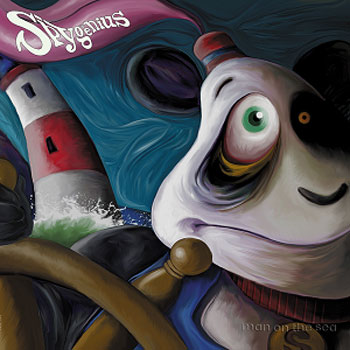 One observation made about The Beatles when they hit America is that they sang without thick Liverpudlian (Scouse) accents; they keys to their success were clearly myriad, but that may have been one of them. It was only when groups like The Kinks (to name one) began to achieve some success that the deep Britishness began to be heard on this side of the Atlantic.

In subsequent years, beloved artists like Robyn Hitchcock have made no attempt to dial back their accent (or, from a certain perspective, their lack of one). And American ears have long since attuned to it; note the success of Oasis, to name another.

All of which paved the way for a wonderful – yet distinctly British – group like Spygenius to find receptive ears in the States. And well they should, because as showcased on Man on the Sea, they’re a group of considerable creativity and appeal.

High-energy melodic rock (powerpop, if you must) is in ample supply; witness the opening track, “Another True Story.” But Spygenius is no one-dimensional outfit. As early as the second track (“Albion”) the Canterbury group has shifted gears, delivering a lovely melody with enough barbed-wire texture to take the tune to another level.

Seventeen songs is a lot of material; when an artist stuffs that much music onto an album, it’s fair to approach it with skepticism: are they poor editors who simply dump everything out there, GbV- style? There’s no need for such guardedness where Spygenius is concerned; Man on the Sea doesn’t have any weak tracks. In fact, the album has the character of a best-of collection from a band you just didn’t know about until now.

Jangling pop, ambitious art-pop, Who-like punch, heavenly vocal harmonies, subtly psychedelic flourishes and a strong sense of melody are Spygenius’ stock in trade, and they’re all served up in great supply on Man on the Sea. Imagine a less quirky XTC or a slightly more idiosyncratic Squeeze, and you’ll begin to approach the character of Spygenius.