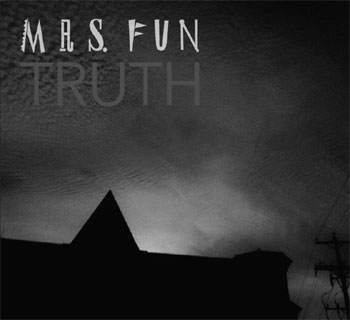 I tend to look with skepticism at guitar-drum duos; for me, it’s been done to death, and few did it with as much creative success as Flat Duo Jets. But when it comes to keyboard-drum duos, I’m prepared to allow a bit more latitude, because the sonic possibilities of keys are more varied and expansive. But the concept still gives me pause, mainly because I haven’t witnessed many that have provided any music of significant interest.

That all changed when I received an album called Truth by a pair calling themselves Mrs. Fun. This Milwaukee duo features drummer Kim Zick and multi-instrumentalist (but primarily keyboardist) Connie Grauer. Their chosen métier is a kind of fusion jazz, and the keys (and bass keys) and drums were tracked live, with occasional bits of guitar and vocal overdubbed afterward.

The music is more than technically impressive; it’s consistently inventive and engaging as well. The album opens with a fanfare on “19,” and Grauer’s keyboard textures sound straight out of 1982-era Frank Zappa (specifically the Tinseltown Rebellion live double album). But just as soon as you think that’s where the tune is going, the pair shifts gears into something closer to hard bop-meets-’70s-funk, with a watery electric piano sound. That changes again, with a (keyboard) bass countermelody sparring with a drum part that does far more than keep a beat.

“Process is a Purpose” is a vocal tune; Grauer alternatively speaks and sings, all the while laying down bass and electric piano. It’s hypnotic, midway between three points: sultry vocal jazz, skittering hip-hop and the slightly odd vibe of what is essentially a white lady rapping. (And hey, why not?)

“Tula’s Turnaround” is more conventional; it sounds like an especially tasty jazz trio or quartet. But then you remember that this is merely two musicians, playing live. It’s astounding stuff, and highly accessible. “Silent Mist/How Insensitive” is cut from the same cloth, with a fetching melody and more spoken-word vocals. And Grauer’s soulful soloing evokes memories of Joe Zawinul.

Speaking of that adjective, “Soulful Strut” sounds like the sort of thing one might find deep into a ‘70s Stevie Wonder double album. And speaking of the Weather Report (and Adderley Quintet) keyboardist, Mrs. Fun pays tribute to him on “Zawinul,” with some more of those Tinseltown Rebellion keyboard sounds. On that track, Zick lets loose with some of her fieriest drum work while Grauer plays like a woman possessed. (Actually, make that two women; listen to that crazy bass line.)

Even when bits of guitar are added to the mix (as on “I Don’t Want to Know Your Name,” they’re used primarily to add extra texture to the core keys-and-drums arrangement. That track also features some delightfully off-kilter vocal harmonies.

Nearly all of the material on Truth is original. A notable exception is a lovely and funky reading of The Doors’ ‘Light My Fire.” The duo approaches it with a jazz mindset: state the head, go off on flights of exploratory fancy, restate the head, explore some more, and so on. It all works, expanding the song beyond its original intent in fascinating ways, yet staying true to its original musical spirit.

“House Party” sounds like a drum machine and The Art of Noise let loose in Pee Wee’s Playhouse, with some jazz players joining in the fun. Crazy stuff to be sure. “Orange Grove” feels like an enthnomusicological excursion; I hear hints of Spain, Greece, North Africa, and Bill Evans-style piano jazz.

Mrs. Fun heads for the outer reaches on the kinetic yet atmospheric “Space Port/Pinnochio.” The first part is otherworldly fusion; the second is ambient music … with drums. Like I said, crazy stuff. But good-crazy; really good-crazy.

Kellen “Klassik” Abston provides some genuine hip-hop guest vocal work alongside Grauer’s vocals on “Let Me Live My Lie,” a hip hop/jazz summit that will appeal to fans of The Midnight Hour. The bass solo is dizzying. The set closes with “Calm Before the Storm,” a track with three guest vocalists; the singers are superb as they repeat the title phrase, but it’s Mrs. Fun duo’s instrumental work that makes the track something special.

If you’re looking for something far outside the musical mainstream that isn’t self-consciously arty, Mrs. Fun’s Truth should be your next stop. And not to spoil the, er, fun for you, but it’s the duo’s eighth album. So many more pleasures await your discovery.