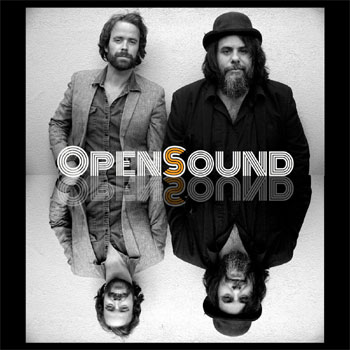 Fernando Perdomo is everywhere (including the virtual pages of this music magazine). Equally comfortable in (and skilled at) progressive rock and powerpop, he’s a utility man to the stars since his relocation to Los Angeles. He’s a multi-instrumentalist, producer and songwriter. I hesitate to call Open Sound his latest project, because it’s highly likely that he’s done two or three others since this one.

But Open Sound is a collaboration between him and Justin Paul Sanders. The two handle nearly every bit of writing, singing and playing on this uptempo pop album. Not really powerpop, it’s better described as straight-ahead, vocal-forward melodic rock. The songs are generally build around a memorable chorus, and timeless elements like hand claps figure prominently in the songs.

Open Sound does a fine job of evoking the CSN vibe on “Thinking of You.” Here’s a guess: Perdomo is a keen listener who absorbs from that to which he is exposed, so his work (in the service of others) on the Echo in the Canyon project finds a more personal kind of creative expression here.

The tunes don’t swing for the fences; for the most part they’re breezy, catchy and well-executed songs that don’t aspire to be more than they are. At its core, the sound of Open Sound is one of two musicians — both clearly very good at what they do — having an enjoyable time in the studio, putting together crystalline songs that evoke pleasant memories of ‘70s hit radio.

Standout track: “She’s On Her Way,” one of the album’s four Perdomo/Sanders cowrites.