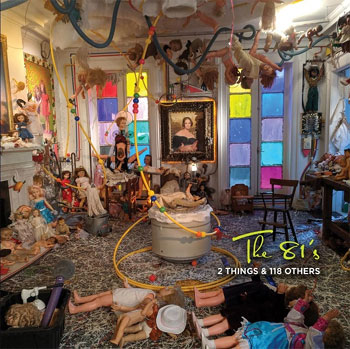 The 81’s (that’s their punctuation, not mine) make a Crazy Horse-styled, shaggy rock that bears the influence of folk (in the lyrical approach) and punk (in the guitar textures). Music without artifice, 2 Things & 119 Others is sold rock with lots of impassioned (but not overwrought) guitar solos. The songs are more than mere excuses for soloing, though; while they’re structurally simple, they hold up to close inspection.

If you dig The Blasters, this group may well be to your taste. Take their stripped-down approach, add some nice vocal harmonies and add lyrics that works as well on the written pages as they do on record, and you’ll have this album. There’s a timeless feel to this music; it could have just as easily been recorded last week as in 1975 or 1987. The 81’s are from Nashville, but the twang quotient on 2 Things & 118 Others has more in common with paisley underground groups like The Long Ryders, Dream Syndicate and the like.

While guitarist Tim Carroll is the (excellent) lead vocalist, The group’s secret weapon is backing/harmony singer Addi McDaniel. Her pipes add just the right texture to the songs. The moody “Camino de Santiago” is cinematic in its cope and delivery. And lyricist Tom Siering (who doesn’t play or sing on the record) is at his strongest on the searing social commentary of “Facebook.” And while much of the album is midtempo, the driving rocker “Jimmy” – nearly halfway through the record – shows that The 81’s can amp it up.

A mild caveat: The group’s stylistic palette isn’t the most expansive. But there’s virtue in consistency. Put another way, if you like the opening track, that’s a good indicator of how you’ll feel about the 11 tracks that follow. Me, I dig it.