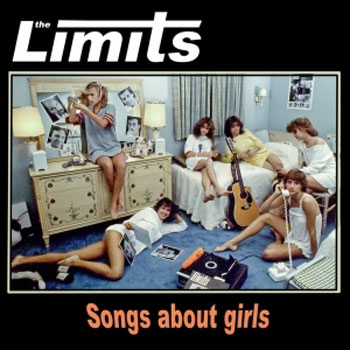 Reunions are a common occurrence in rock music. 1960s garage rock band The Limits never achieved any notability outside their hometown, but a new group bearing that name came out in ‘79. With a sound that drew from garage rock, pub rock, new wave and hard rock, the new band wouldn’t really have much musical connection at all with its ‘60s forebears. But taken on its own, the music on Songs About Girls is solid stuff.

If you heard and/or purchased any of Rhino’s DIY collections, the music on Songs About Girls will sound warmly familiar. Shades of both the American and British variants of that sorta-power pop crop up throughout this set. Tight, tough and no-nonsense playing is wedded to solid songs that – though hardly anyone would hear them at the time – effectively capture the sound and spirit of the era.

The connection between old and new Limits is guitarist Rick Levy, who continues to lead The Limits to this day. (In a tidy bit of serendipity, he also plays with the Box Tops; that group’s original singer, Alex Chilton, was a big fan of the ‘60s Limits.) The vocal harmonies that were a defining characteristic of the ‘60s lineup are on display here as well on songs like “Love, Love, Love.”

Some of the tunes bear characteristic of that early’ 80s sound in a way that doesn’t wear well – stuttering guitar riffage, stiff and boxy drum sounds, sterile keyboard textures – but at their best, the ‘80s lineup The Limits sounds like a cross between The Producers and The Rubinoos. You could – and likely usually do – do a lot worse. “Don’t Steal My Heart” sounds like the ghost of Buddy Holly filtered through the sensibility of The Knack, with the nasty edge smoothed over.

And The Limits’ sense of humor shines through here and there as well. A definite highlight of Songs About Girls is nervy ‘80s rethink of Merseybeat titled “I’m Not Telling You Now.” Listen and you’ll get a feel for how Freddie Garrity’s band might have sounded fifteen years after their heyday.

The marginal, no-budget sound quality may threaten to put off some potential listeners. Don’t be one of them. Just tell yourself you forgot to degauss the heads on your cassette deck, and enjoy Songs About Girls.