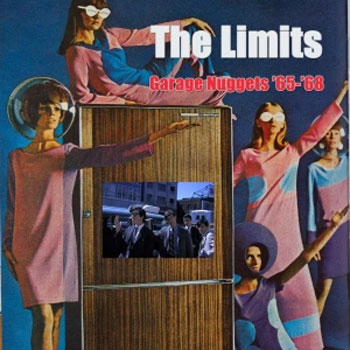 It’s nice when an important figure in music says nice things about your music. Even if that person is something of a cult figure like Alex Chilton, it counts. And apparently Chilton (Box Tops, Big Star) thought highly of the music made by an Allentown, Pennsylvania garage rock band called The Limits. Like so many other young groups of their era, The Limits never hit the big time. But they left behind a small volume of recorded material. Those songs have now been complied and released as Garage Nuggets ‘65-’68.

Right up front, the album’s title tells interested parties a good bit about what they need to know. Garage rock? Check. A reference to Lenny Kaye’s influential compilation? Check. The halcyon years of the subgenre? Check again.

The collection features demos and more polished recordings, and showcases the band tackling the kind of material one would have found in the repertoire of most such bands of the era. Dale Hawkins’ “Suzie Q” is a version that has nearly nothing to do with the arrangement CCR would use soon thereafter. And The Limits’ reading of “Hitch Hike” is the missing link between the original and The Velvets’ “Here She Comes Again.”

A reading of “King Bee” is somewhat turgid, but the band clearly meant for it to be that way. Too bad there was a blanket covering the mic (well, that’s what it sounds like).

But The Limits’ original material shows that they were a cut or three above most of their ilk. “Say it Again” is bouncy Merseybeat with winning harmonies, jangling guitars and pretty solid drumming. All in just over two minutes, which is exactly as it should be. There’s a lick or two that seems lifted from “A World Without Love,” the pop hit Paul McCartney penned for his pals Peter and Gordon. But if you’re gonna steal, steal form the best. (It’s not stealing, really; just a lick.)

A cover of “You’ve Got to Hide Your Love Away” demonstrates that The Limits had strong vocal harmony abilities. The guitar is nearly inaudible, but that “fault” serves to highlight just how impressive the vocals are. (It gets unnecessarily weird toward the end, but we’ll overlook that.”

Even when the fidelity is poor – as on “I’m Alive” – the energy and spirit comes through. And for what seems like a later recording (Stereo, with combo organ), “Have Mercy” shows a band with real potential. And perhaps it was their cover of “The Letter” that impressed Chilton. It’s quite good, following the Box Tops’ arrangement. The vocalist leans into the song, Mick Jagger/Keith Relf style, which after all is in the grand tradition of garage rock.

In one of the set’s live recordings, The Limits take Barrett Strong’s “Money” at breakneck speed, sounding more than a little like The Remains in the process. They demonstrate their rapport with the audience, all of whom seem to be digging it just fine. And they channel The Vagrants on their reading of the Otis Redding classic “Respect,” while adding some subtle shading of their own. The set closes with another live track, “Wipeout.” The rapturous audiences calls the band back for an encore, and they deliver.

There’s nothing life-changing here, but for listeners who want a sense of the immediacy that was garage rock, this collection nails it.

NOTE: The Limits re-formed in the ‘80s with, it seems, mostly or all different people. A collection of material from that lineup will be the subject of my next review.