From the beginning, Asheville-based atmospheric black metal duo Feminazgul staked out its own unique musical territory. The genre is known for its focus upon punishing riffs, themes of violence and mayhem and growling, bowels-of-Hell vocalizing. And while Feminazgul’s music displays all of those characteristics, its debut album No Dawn for Men adds two unusual elements to the mix: a feminist perspective and musical nuance. 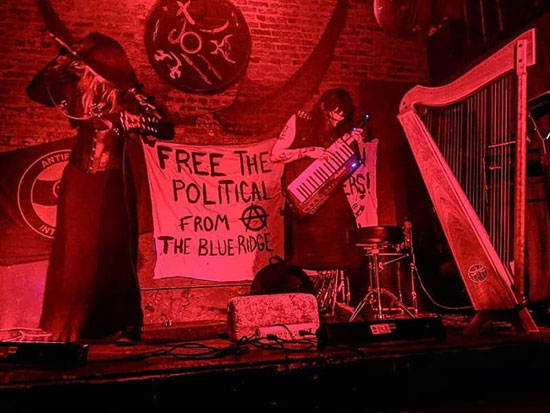 The album was finished in February, and release was planned for later this year. But in light of the pandemic and quarantines – vocalist Laura Beach and instrumentalist Margaret Killjoy live miles apart – Feminzagul decided to release No Dawn for Men digitally in March, with a pay-what-you-can policy that acknowledges the financial strain facing potential buyers.

Beach says that she received “quite the extensive education in metal” during her six years as a radio deejay in Knoxville, Tenn. But she detected some characteristics that didn’t impress her: “I noticed the very male-dominated subculture.” And she found that many black metal artists tended to limit themselves to a fairly short list of topics. Feminzagul aims to move beyond that. “We do talk about hate a lot,” she says with a chuckle. “But it’s a different kind of hate.”

“Metal is so male-dominated that it’s hard to find space for women in it,” says Killjoy. “And I see very little active trans-inclusion.” Feminazgul’s very existence represents a departure from that narrow perspective. “If we sing about goddesses, we’re going to sing about them with a different kind of reverence than men might,” she says. 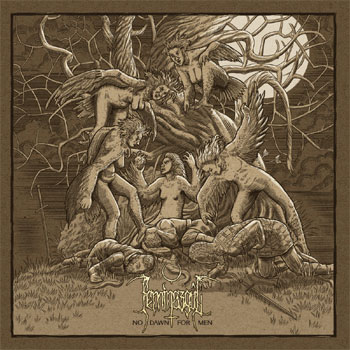 Feminzagul’s 2018 debut EP The Age of Men is Over was a Killjoy solo instrumental work. But even without Beach’s vocals, the release stood apart from standard-issue black metal. Killjoy laughs as she recalls that one reviewer characterized it dismissively as “the most effeminate black metal that’s ever been made.” Killjoy took that as a complement.

“So as I began writing the music for No Dawn for Men, I really decided to just lean into that,” she says. Killjoy challenged herself: “How can I express this darkness and anger while also still being effeminate?” The album answers that question by combining themes familiar to black metal fans (tracks like “I Pity the Immortal”) with lyrics that celebrate the feminine (“Illa, Mother of Death”).

Feminazgul’s music also colors well outside black metal’s perceived lines by employing a wide instrumental palette. “I like to call us avant-garde atmospheric black metal,” Killjoy says. “Because we use all sorts of interesting instruments like accordion and theremin.” Beach says that the resulting sound “can be a lot more soothing” than other black metal.

Killjoy concurs. “It’s the most pleasant version of fast guitars and someone shrieking that you could possibly imagine.”