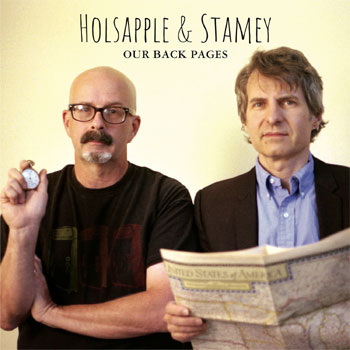 As wonderful as the dBs were during their original run (featuring Peter Holsapple with and then without Chris Stamey), the more acoustic-flavored efforts by Holsapple and Stamey – 1991’s Mavericks and 2009’s hERE aND nOW – were truly special as well. Decidedly different in tone and energy, but simply superb they were, even for a listener like myself who nearly always prefers electric over acoustic guitars. The unique chemistry and musical simpatico that the two very different singers and songwriters enjoyed resulted in something that (if one can imagine such a thing) was greater than the sum of its parts.

So to learn (in the decidedly desultory time of COVID-19) that during the hERE aND nOW period, the two took the time to create acoustic arrangements of songs from the dBs catalog is a tantalizing prospect. And the news that they recorded that material, and have chosen right here and now (so to speak) as the time and place to share it is greeted with rapturous excitement. Not to be all non-critical and all, but in this quarter Our Back Pages nearly earns five stars before I’ve even heard it.

But that would be rash, and not especially illuminating for readers of this online mag.

Happily, Our Back Pages is every bit as good as one could hope it would be. The rock trappings of the songs have been stripped away; the pair mostly play acoustic guitars, but they do overdub some additional instruments here and there. And Chatham County Line fiddler John Teer adds some delightful texture on several tracks.

The song choices aren’t always the most well-known ones, either. No “Amplifier,” no “Love is for Lovers” and no “A Spy in the House of Love.” Those are all from the post-Stamey Like This LP, and Our Back Pages understandably focuses on music from the period when both musicians were still in the band.

The 11 songs that Peter and Chris did decide to include provide a tidy survey of material from 1981’s Stands for Decibels and 1982’s Repercussion. And with due respect to the great rhythm section of Will Rigby and Gene Holder, the stripped-down arrangements emphasize that songwriting was equally important as sound for the dB’s.

These new versions aren’t intended to replace the originals. And they’re not demos that illuminate the creative process. Instead they’re relaxed re-interpretations of the music, recorded decades after they were originally created. A great deal of water had gone under the bridge by the time of the Our Back Pages sessions, and that lived-in feeling permeates the songs.

In its acoustic rendering with prominent banjo, the introduction to Stamey’s “From a Window to a Screen” sounds uncannily like something off R.E.M.s’ Out of Time. And Holsapple’s classic “Black and White” delivers its heartfelt lyrics in such a different musical context that it might as well be considered a completely different (yet equally great) song. The acoustic “Big Brown Eyes” has a feel a bit like Pete Townshend’s solo Scoop recordings, but it still has that distinctive, chiming and decidedly Southern vibe that characterizes the dB’s work.

The duo plugs in – just a little – for “Picture Sleeve,” but the arrangement is still based in acoustic textures. And the swoonworthy, Everly Brothers-influenced vocal texture so prominent on hERE aND nOW shines through all of the tracks. Throughout Our Back Pages, the friendship and camaraderie that helped create the music is on brilliant display.

And for the faithful, two tracks on the new set deserve special mention. “Depth of Field,” the liner notes tell us, was written for Repercussion but not included on that record. The new version features lovely and subtle violin work that makes it of a piece with much of Stamey’s sublime solo work of the past decade. Holsapple’s “Nothing is Wrong” was included on Repercussion, but the version here – featuring the full band plus guest keyboardist Andy Burton – features Stamey rather than its songwriter out front on lead vocal. And while the original had a forlorn, haunted and faraway Big Star’s 3rd vibe, the new version feels more intimate and vulnerable. Fans of the dBs, Peter Holsapple and/or Chris Stamey will want both recordings in their collections.

Recorded without any thoughts of release, Our Back Pages is filled with emotional resonance and damn fine music that belie its modest origins. With nearly everything everywhere on indefinite hold, it’s a digital-only release. But I’ll make a hopeful prediction here and now (so to speak) that when Record Store Day 2021 rolls around – assuming things have gotten back to some kind of new-normal – we might see a vinyl release of this gem.

RSD21 Update: My prediction was close but not quite on -target: A CD release. I’ll take it!