Bill Kopp: Back in the ’70s and the early ’80s, did Arista Records ever put pressure on you to assemble a live band?

Alan Parsons: No, I don’t think so. They knew my identity was in the studio, and that’s what I was. I was a producer and engineer, and an occasional composer. Eric was the songwriter. That wasn’t really an act. It was the people we surrounded ourselves with who gave us the opportunity to sound the way we did. It was officially a duo, not a band.

But I started playing live when I did my first solo effort as Alan Parsons rather than the Alan Parsons Project. Around ’94-’95, that’s the first time we put a band together. By the ’90s the technology had improved hugely. MIDI [Musical Instrument Digital Interface] was everywhere, there were pre-programmed keyboard and orchestral sounds, samplers were there. It was the right time for us to start playing live by then. And I’ve been doing it ever since. 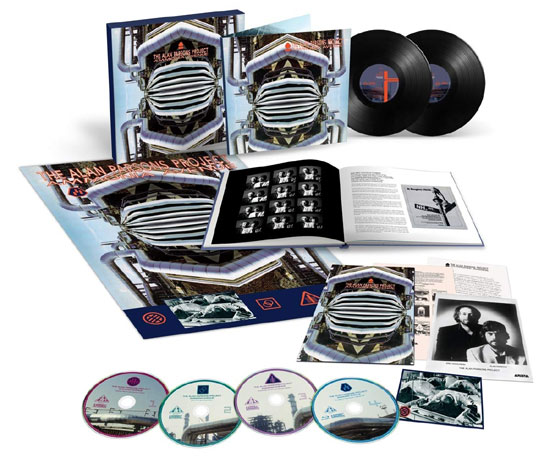 Considering the run of albums from Tales of Mystery and Imagination in 1976 through Gaudi some eleven years later, are you able to choose one that you’re most proud of?

The first album was really the one that I got the most satisfaction from. It was the first of a new breed, sort of like a first-born child. It was my first opportunity to put my production and engineering to the fullest. But also composition: I was really only getting into songwriting for the first time; that was a big challenge. And I was proud; not only was I able to engineer and produce, but I was also able to compose.

A hallmark of the Project was using vocalists who were particularly well-suited for a given track. One excellent example is Clare Torry singing “Don’t Hold Back” on the 1979 album Eve. You consistently featured fantastic singers like Colin Blunstone. But was there ever anyone you would’ve liked to have had, but didn’t get?

I think in the APP days, we pretty much never got refused. In later years I did express interest in George Michael and [Duran Duran vocalist] Simon Le Bon, who we were unable to secure. But we generally got a “yes” when we made an offer to people.

Is there anything left in the vaults from the Alan Parsons Project that we might hear in the future? Maybe more unheard material from the 1977 I Robot sessions?

The only boxed sets so far are Tales of Mystery, Eye in the Sky and now Ammonia Avenue. So there’s still another seven albums to go, and I’m sure we’ll unearth some stuff. I don’t think there will be much in the way of completely unreleased songs, but there will be early mixes, demos and things like that for the remaining albums.

The next one I’m pushing for is [1980’s] The Turn of a Friendly Card, because we are going to be playing that live this year. I’m pressuring [Eric Woolfson’s daughter] Sally to get all the material to put that out ASAP.

Speaking of the Live Project, is it a challenge to put together a balanced set list that satisfies both those who know the hits and the hardcore fans?

Yeah, there are favorite tunes that have always gone down well live. Perhaps one of the unusual ones is “Limelight” [from Stereotomy]. That was never really considered a hit song. “Psychobabble” [from 1978’s Pyramid] is another one we’ve always done well.

Essentially, we play safe; we play the most popular tracks off each album. We try to represent every one of the ten albums. But it’s pretty easy. Each time we return somewhere – a particular city or a particular venue – I try to look back at that list and do something a bit different.

You worked as Glyn Johns’ assistant engineer for the Beatles sessions in January 1969. Do you have any involvement at all in the upcoming reissue of Let It Be?

Every time I post online a picture of myself on the roof of the Apple building [3 Savile Row, London] for that concert, it gets thousands of hits. I am going to be doing an interview with Peter Jackson, who is going to re-edit the film. I’m hoping to meet him; we’ll see.

I’m rather hoping that the re-edit of the movie will actually show some footage of me. [At present] there are only a couple of still pictures that show me at all. But I was there! I know the camera was pointing at me, occasionally. And I’m hoping there’ll be a glimpse of me in the re-edit.