This story is the third of three this week in which I connect with Asheville-based companies serving the music industry. — bk 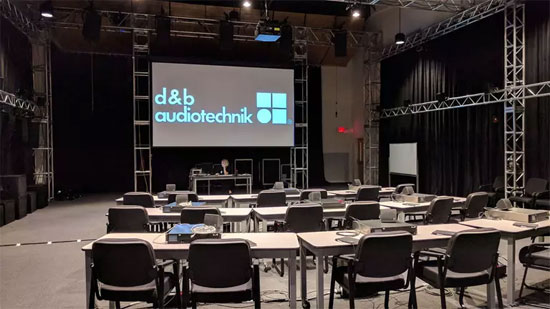 With its headquarters for the Americas in South Asheville, d&b audiotechnik makes loudspeakers and amplifiers for live music and other applications. Manufacturing is done at the parent company’s factory outside of Stuttgart, Germany; opened in 1998, the Asheville office employs 23 people. The company’s audio systems are used worldwide in venues including London’s Royal Albert Hall and the Sydney Opera House, and locally at the Orange Peel, Biltmore Church and other venues.

CEO Larry Italia classifies d&b’s markets into two parts: mobile and installations. “Our touring, production sound business has been severely impacted,” he says. “Because all the shows and sporting events are canceled, and we’re in the mass gathering business.”

Fortunately, d&b equipment is also used in permanent, non-mobile applications like concert halls, churches and large arenas. And Italia says that so far, COVID-19 has had little to no impact on the installation side of the company’s business. But challenges remain. “There’s no federal leadership on this,” Italia says. “Every state, county, and even city does its own implementations of stay-at-home orders and re-opening phases.”

Italia says that the pandemic hasn’t affected the company’s long-term plans. But he believes that large-scale live music events aren’t coming back soon. “Returning to it as it was before – which means 50,000 people sitting in the Hollywood Bowl without masks and protective gear – that will be 2021 at the earliest,” he says.

Even against that backdrop, Italia expresses guarded optimism. He says that the consensus among major players in the industry is that “when [live music] comes back, it’s going to come back bigger than ever before.” The pent-up demand of concertgoers, coupled with the motivation of artists to get back on the road makes it possible that small- and medium-sized concert venues could see a resurgence of business. And because health and safety protocols are easier to implement for outdoor events, festivals may come back soon as well.

The pandemic’s danger will subside at some point. When that happens, DeLaCruz says that d&b is “planning to bring people back in [to the office] gradually. We’re not in a rush; we want to make sure everyone is safe.”

While making it clear that her primary concern is the well-being of d&b employees, DeLaCruz is optimistic about the company’s business, too. She vividly recalls something Italia told the company’s assembled workforce in the early days of the crisis. “The music never dies,” he said. “This is temporary. You can’t stop music. And we’re going to bounce back.”