Bassist Sam Jones was an important figure in hard bop and soul jazz of the 1950s and beyond. Alternatively known as “Cannon’s Theme,” his composition “Unit 7” was a showcase number 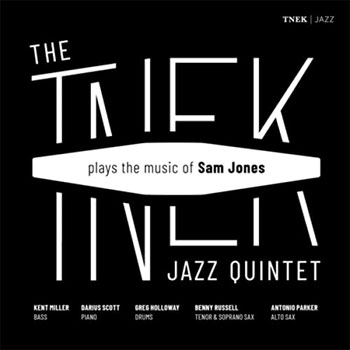 for Adderley’s Quintet. Jones played with Adderley during the latter’s peak period (roughly 1957-’65, and again near the end of Adderley’s time on Earth). He was part of cornetist Nat Adderley’s band as well, appearing on seven albums. Jones also worked with other big names including Kenny Burrell, Chet Baker, Donald Byrd, Lou Donaldson, Art Farmer and many others. And beginning with 1960’s The Soul Society, Jones led a band of his own for a string of well-regarded albums.

Jones left behind a formidable catalog, and it’s to that body of work that The Tnek Jazz Quintet applies itself on Plays the Music of Sam Jones. Drawing from Jones’ compositions (and one Burrell number that Jones played on), the Quintet digs into these tunes with a perfect balance of reverence and originality. There’s nothing about this album that identifies it as a 2020 recording; it has that classic live-in-studio feel — no effects, no production gimmicks – that underscores the timeless character of the music. If you’ve already amassed a collection of the best that late ‘50s to ‘60s jazz has to offer, this album will fit seamlessly into your collection. And if you’re looking for a user-friendly entry point into the style, you could do worse than start with The Tnek Jazz Quintet Plays the Music of Sam Jones.