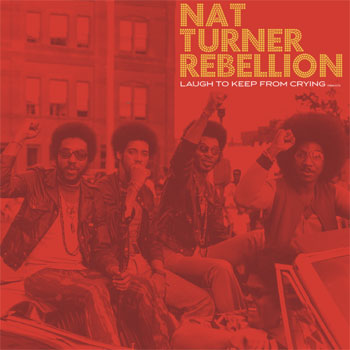 I’ve written of similar observations before; here I am doing it once again. It amazes me to no end that so many years after the fact, never-before-heard recordings surface, and the quality of the music is remarkable. So it is with Nat Turner Rebellion’s Laugh to Keep From Crying. Recorded in various sessions between 1969 and 1972, the 12 songs on this LP are so good, any reasonable listener would have to wonder why they hadn’t heard this music until now.

The answer is a common one. The Philly-based funk-rock-soul group simply didn’t get the breaks its music so richly deserved. The back-story concerning how the music came to light a few years ago is fascinating in and of itself (Drexel University was granted access to Sigma Sound Studio’s archives, and a researcher happened across this material while cataloging the archive) but ultimately it’s less important than the music and musicians themselves.

That fact is belied by the manner in which these songs hold together as a cohesive whole. There’s a unity of purpose, perspective and aesthetic vision at work here. While Jackson had already established a track record as a commercially successful songwriter (The Spinners’ “One of a Kind (Love Affair)”), he was truly at the top of his game with the socio-politically charged songs he wrote for Nat Turner Rebellion.

From the pointed historical touchstone of the group’s name to the socially aware subject matter of songs like the title track, “Fruit of the Land” and “Plastic People,” The Nat Turner Rebellion made music that chronicled the urban experience of its day. And as current events have continued to demonstrate (to coin a phrase), precious little has changed over the intervening decades between the making of these songs and present day.

To a willfully ignorant listener, the black pride sentiments that lay at the heart of many of these songs might seem preserved in ember, a kind of time capsule of the early ‘70s. But today’s headlines make plain that the hopes, frustrations, aspirations and fears expressed in these songs remain as relevant to our current condition as they were the day they were committed to tape.

But social relevance alone does not a great album make. It’s the music, the vocal harmonies, the delivery and the arrangements that come together to create a five-star album. If you can imagine Sly and the Family Stone crossed with early Blood Sweat & Tears and a hefty helping of funk Philly soul, that would begin to hint at the greatness found in the grooves of Laugh to Keep From Crying.

Yet success wasn’t in the cards for the group, which broke apart in 1972 without releasing most of the music heard herein. Today only Jefferson survives from the group. Here’s hoping that this belated release – first issued on extremely limited edition vinyl by Vinyl Me Please in 2019 and now reissued by ORG Music for Record Store Day 2020 with new cover art – provides him some measure of satisfaction.