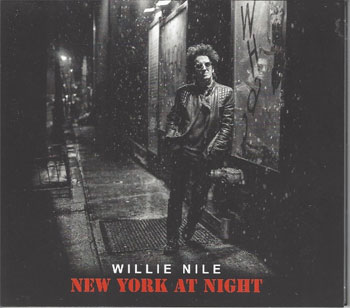 Way back when Bob Seger finally broke through nationally, much was written about how it took him many years to become an overnight sensation. And he’s merely one example of highly talented artists who toil in obscurity for years. Some – most, actually – never break out. They might earn a measure of critical claim, but not the kind of thing that puts food on the table. They might cultivate a small yet loyal following, and if they and their fans are lucky, they’ll find a way to keep making records, keep playing shows.

All of this came to my mind as I popped New York at Night into my CD player. Its maker, Willie Nile, has been in the rock ‘n’ roll game for a long time. A long time, I say: I saw him live in concert, opening for The Who. In 1980. Nineteen-eighty. That’s 40 years ago. And while critics (this writer among them) enjoy his gritty, heartfelt and rock-solid musicianship and writing, he’s never quite broken through on a commercial level.

Nile’s latest release is a collection of story-songs that paint a picture of his city. Helped out by a bunch of friends (and fellow New Yorkers), the album has an inviting vibe. It’s easy to create a “mind movie” to accompany songs like “Doors of Paradise.” More often than not, the images would be silent footage of the City, moving through it quickly in a car. Nile’s well-worn voice reinforces the lived-in feel that his lyrics present.

He explores a variety of themes, but there’s an undercurrent of regret and resignation that percolates through tunes like “Lost and Lonely World” and “A Little Bit of Love.” Yet there’s a glimmer of clear-eyed optimism that is welcome, especially in these times.

Standout track: with its musical quoting of “Little Bit of Soul” by the Music Explosion, it’s gotta be the title track, “New York at Night.”