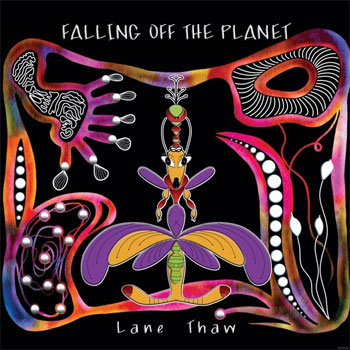 Existing outside the world of rock ‘n’ roll, Lane Thaw’s Falling off the Planet is the kind of record that suggests an alternate timeline, one in which cult artists like Leon Redbone and Randy Newman hit the big time. With a large ensemble that includes violin, viola, marimba, lap steel, banjo, ukulele and flugelhorn alongside more traditional instruments like electric bass, the album bears the influence of big musical thinkers like Van Dyke Parks.

And then you get to the second track. The title track has a vaguely psychedelic feel that subtly recalls the Beatles’ “I am the Walrus.” It’s still not rock per se, but the sensibility is there. “North to College” is a piano ballad that suggests early Billy Joel or Jackson Browne, and it features some lovely orchestration. “One Kabuke No Nuts” is a jazz instrumental designed to close the first side of the vinyl LP (production was halted due to that pandemic you might’ve heard about, so for now it’s CD-only).

The second “side” is equally all-over-the-map. To say that Falling off the Planet is an eclectic work is to engage in severe understatement. Where some albums have a uniform sound and musical approach, Thaw seems to build each and every track from the ground up; as such his voice is really the only characteristic that ties the stylistically disparate tracks together.

Those intimidated by Thaw’s brand of gleeful eclecticism are advised to steer clear. But listeners who appreciate musical adventurism and an all-encompassing aesthetic that finds a place for Andrews Sisters-style vocals (“I’ll Do All the Rest”) on the same album as pre-WWII pastiches (“Tokyo Belle”) and zydeco (“Fiddy Dollar Bill”) are in for a real treat.